We'll combine a few classic carving and tipping drills into one: the tuck turns with counter, which will help with flexing and tipping while developing the counteracting.

We'll start looking at the tucks, if you haven't done any before: there are two basic tucks: high and low. You can start with either. 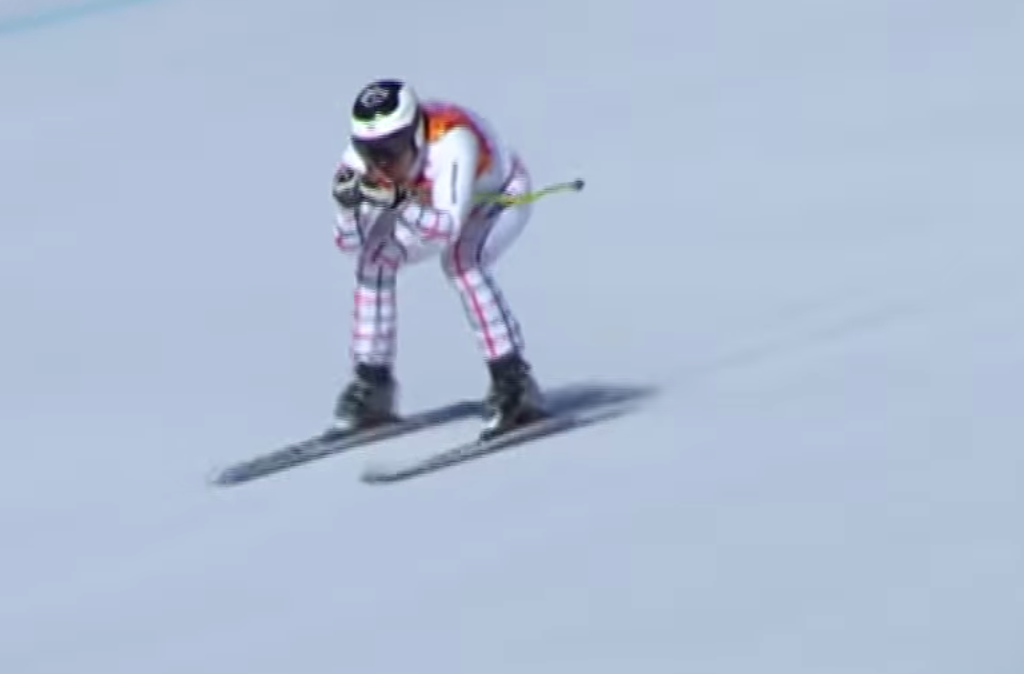 A racer in a low tuck

Note that the wide stance shown in the typical "racer tuck" above makes it harder to tip the skis on edge, so we will use a narrower stance, see the videos below.

Rollerblades are a specific drill, where you roll your ankles on and off the edge, engaging and releasing the edges with 100% carved turns. It looks and feels like riding rollerblades and, since you need to flex the knees, it's also often done from a tuck.

Let's start, in the form of a simple tuck turn and later progress to adding the counter - if you've never done tuck turns before, you can start here, basically doing rollerblades:

Get into a tuck and start a green run.

The point of the rollerblades drill is to develop a feel for rolling the ankles and engage/release.

Note how much harder it is to tip the skis together when in a wide stance and how it becomes easier in a narrow stance.

It is important for the shins to be parallel, meaning the skis are both tipped on edge an equal amount and carve parallel, together. See Parallel shins and Stance alignment for details.

Once you get familiar with tuck turns, adding counteraction and Coiling to tuck turns turns an already great drill into an awesome drill, developing a feel for countering and core usage.

This is a drill you will want to repeat at least once a day, until you get it right and after that regularly. It's a great season opening drill.

You'll want to warmup first and then get into a tuck and start turning down a green/blue run, with rollerblade turns.

Start adding counter to the turns: as the skis start turning because they're tipped on edge and the lower body turns one way, turn the upper body the other way, pointing the handles of the poles to the side of the hill, until you feel tension in the core and back. This will create a countered relationship: i.e. the upper body with the poles faces one way and the skis face another.

Repeat on the other side. As you reach maximum countering, maintain it throughout the rest of the turn. Unwind it at the end of the turn, as you're going back to neutral, i.e. when the skis are flat - and start coiling the other way right away!

Focus on staying in balance throughout and rotating the entire body with the poles, not just the hands. Make sure your hips face outside of the turn, like the shoulders do.

Note the increased grip and carving of the skis, especially the outside ski, as you increase the counter in a tuck!

Play with the range of motions: MORE.

Here's the drill again, performed at an expert level:

Why do you think the grip of the outside ski increases with the counter?

Member-only content avilable (114 words).
To see more on this topic, you need a membership. (Basic)

Member-only content avilable (71 words).
To see more on this topic, you need a membership. (Gold)