The wall is a rule of thumb used1 by the USSA to guide how much separation we should create in the average Giant Slalom turn, throughout the turn and the principle says that you should attempt to maintain a "wall" or a plane with the shoulders, knees and boots, so that the hips and shoulders shuffle forward an amount equal with the boots. This geometry however has a very narrow application, as we'll soon see.

The boots themselves shuffle because of the boot's stiff cuffs. Here's a slight "wall" - you can see that the left boot has shuffled forward with the knee, hip and shoulder countering roughly the same amount, so they vertically are on top of each-other: 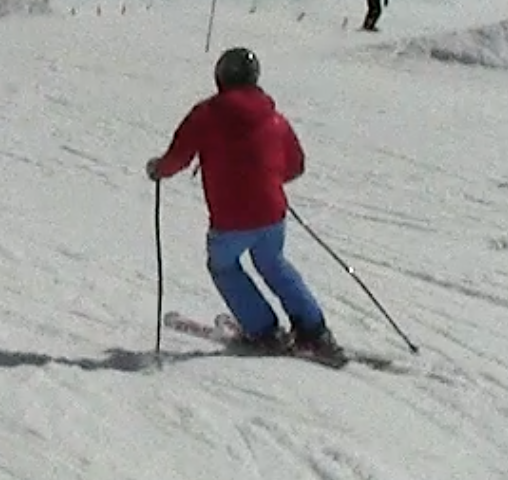 This principle introduces a slightly countered relationship throughout the turn, and it may be a reasonable rule of thumb for how much upper body counter should be present in some Giant Slalom and large turns. Not necessarily applicable for slalom and short turns, where extremes like this one are more common:

The main idea behind the wall is that the inside foot will have to shuffle as we tip the skis on edge more and create vertical separation, see tip lead. This is because the boots force us to maintain somewhat equal ankle flexion and it's something you can easily replicate at home: in tightly buckled ski boots, lift one of the feet on a small chair or step, so that the upper boot is about at the knee level. You will notice that the boot will have to shuffle forward to maintain the same ankle flexion and the reason is the cuff, which will push on the tibia.

You can see the effect at work here - the step exercise (or use a bucket and call it the bucket demo):

So this shuffle appears when going across a steep hill or when you're at big angles, hip to snow, where there is a lot of Vertical separation between the boots. The wider the stance, the more pronounced this effect. For every day skiing there's no real need to be wide-footed or put the hip on the snow, so the effect is fairly small, easily controllable.

Good skiers, however, will resist the geometrical shuffle, keeping the Tip lead in check and they will counter.
Member-only content avilable (448 words).
To see more on this topic, you need a membership. (Member)

As you can see above, the amount of counteracting varies from turn to turn, depending on tactics and recovery needs (the counter in the turn above was exaggerated in order to recover from a lack of angulation earlier).

The wall, while a coaching tool and rule of thumb for some type of turns, is somewhat at odds with the notions of coiling and developing torque between the lower and upper body by separation. Ski racing is much more dynamic than any static guideline or position and each turn may require more or less coiling, this is why we prefer to focus on movements rather than geometric proportions or poses.