Sometimes you try a new movement and the result may look similar to the result of a "bad" movement, or just a different movement. The intent of a movement dictates the specific actions (or movements) you make to achieve that result and the choice of actions makes a big difference in the result on snow.

You will sense that the sequence of movements was slightly different and you in fact used different muscles and different weight shifting pattern to achieve seemingly the exact same result: a position where the lower body is facing away from the upper body.

A different intent triggered a different set of actions, which would have a radically different outcomes on snow, although perhaps not visibly different results as far as body positions go: "countered".

The choice of movements or actions you take to achieve a certain outcome is very important - this importance is often glossed over like it doesn't matter, but it is critical when composing compatible movements - one of the choices above is conducive to carving and what is not, just to have a simple example!

This is why we prefer to focus on the actions or movements that the skier should do, rather than an outcome, see Movements vs outcomes.

With the movements that we describe, always try to execute them in the sequence we prescribe: do not try to out-think this guide and try other, maybe you think complementary, movements.

The issues will not always be obvious immediately, but later, when you start to compose movements. If you did not do the movements the way we prescribed here (i.e. tip the skis with the ankles) the wrong joints will have been "activated" and the wrong muscles tensioned and you'll have issues later on.

For instance, using the example above, if you create counter by pivoting the lower body (see Femur rotation), that is quite incompatible with carving and tipping the skis on edge, so when it's time to re-compose smaller movements, they won't work together.

You will see for instance that, as you tip the skis on edge in the beginning, they will tend to skid and pivot. However, we did not pivot the skis on purpose, i.e. we did not forcefully twist our feet: the skidding was a result of other movements we did - the good, effective movements, but perhaps with a poor timing or range of movement etc.

This is one of the issues you will notice with some instructors and skiers that lack a good understanding of cause and effect and the fundamentals of skiing: they tend to discuss only outcomes rather than intents or actions and movements.

For instance "he was pivoting well". Meaning that "he (or she)" actually tipped the skis on edge appropriately to the speed and radius of the turn he was trying to make, was likely balanced in the middle of the ski, did not apply much steering and the skis skidded a nice arc. It doesn't really convey any specific information as to what the skier did well.

The problem there is that when it comes time for feedback and prescribing changes, you'll hear instructions like "pivot slower". What? How? Since all we did was to tip the skis on edge, maybe we'll tip them slower? Or transfer the weight slower? Or apply more or less pressure on the tails? There are many changes in intent and actions that we can do to get the desired change in outcome!

Look at how many things are going on in this photo: 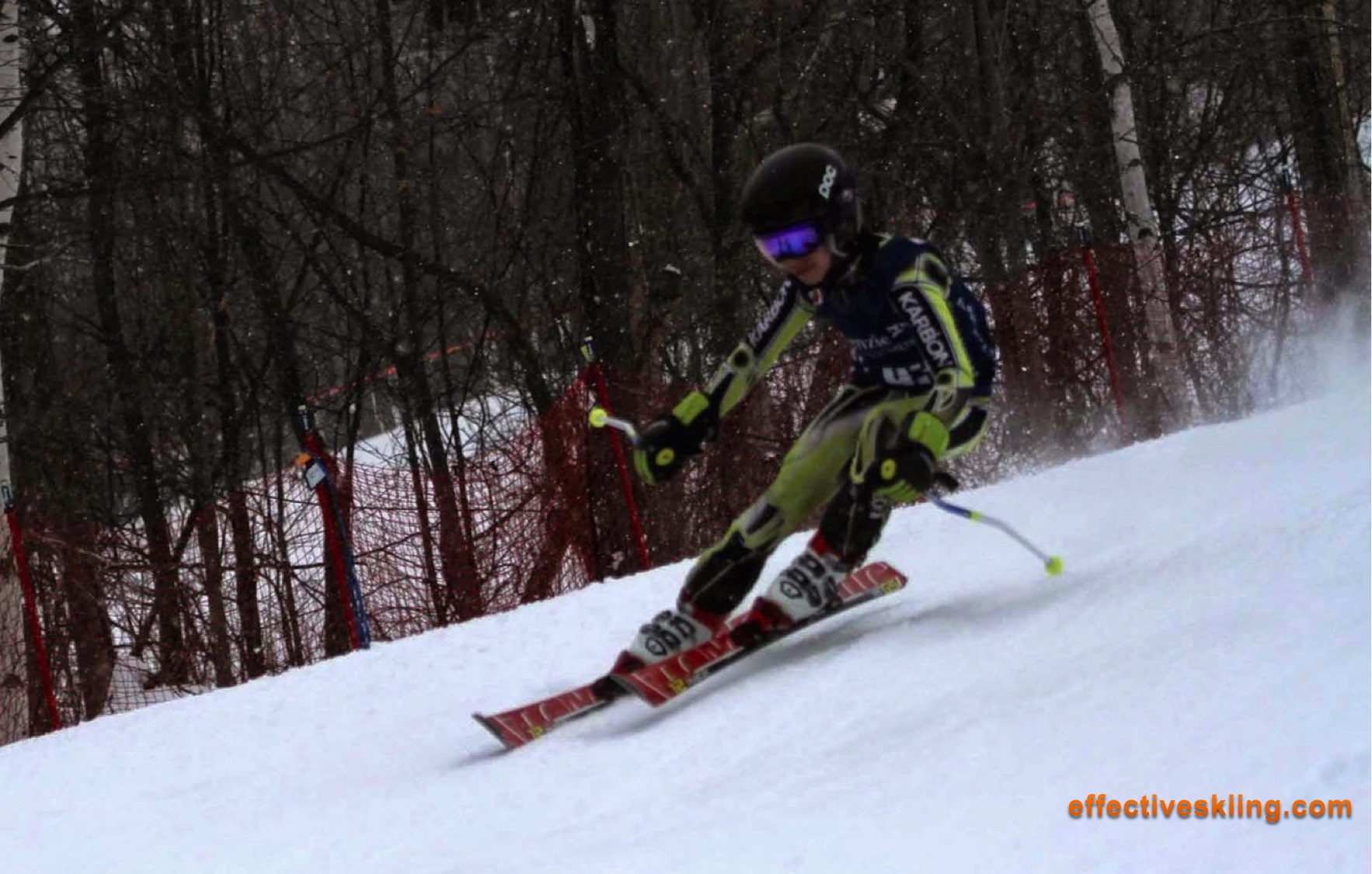 If the instruction leading to this was just "make the edges grab better" (i.e. focused on the outcome) instead of emphasizing lifting the inside ski to transfer more weight and say angulate the upper body over the outside ski to allow more tipping angles and transfer yet more weight (i.e. specific actions), would he have figured it out? Would these all come together to result in that outcome?

How about the feedback? The feedback should be related back to the instructions given - so... "more of what"? Feedback has to be informative as to what the skier should correct, which actions to take.

While this kind of complicated analysis is reserved for the expert levels, in the drills we have here, we always try to be specific with the instructions as to the actions you take and also the evaluation criteria, what to look for - so resolving feedback should be generally simple.

A lack of understanding of the difference between intent, action and outcome is something you should always pay attention to. Usually in these cases, the feedback you get tends to be related only to elements that are observed and you will have to figure out what to intents or actions to change.

Newer coaching methodology includes such things as decision training. These must be applied carefully though. Just asking the skier for the 345th time to "carve" will not help them discover anything.

Good feedback and instruction relates to specific actions you must take - not to downplay decision training, but in the words of Jonathan Balou: "guided discovery is a lot more effective when the people know what they're trying to discover"! Questioning is important, certainly, but now we're crossing into the performance skiing domain and we should stay within the realm of this green level!

Throughout this website, we try to focus instruction on the actions you take and to be clear on the outcome we are looking for.