Expert skiers tip the skis on edge from the feet and ankles - many skiers though have a tendency to stick the hips out, drop them into the turn and help edging the skis that way - this is called hip dumping. It is not a good idea and usually indicates some problems with the setup and stance or too many bad habits++. 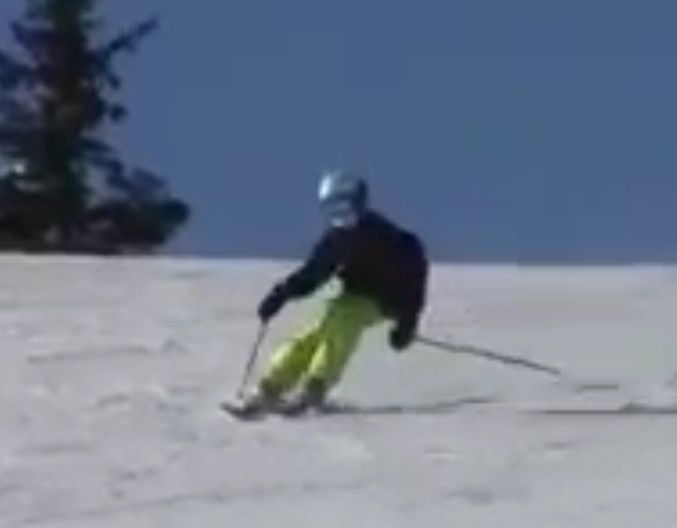 Hip dumping with an A-frame as well

Some reasons for hip dumping, other than simply bad habits, are equipment related and these should be checked first:

See Tipping not hipping for details on how equipment affects hip dumping and ideas on addressing it.

Sure enough, to have the skis on edge, the COM (i.e. body) must be lower and inside the turn, this concept is referred to as inclination of COM... so, if the hips need to be low and inside the turn anyhow, you may ask well, why does it matter how they get there?

It is very important! Performance skiing (as well as good skiing in balance) is driven from the lower body and complemented with the upper body. When you edge or steer the skis from the hips, similar to pivoting by counter-rotation and other upper-body driven forms of skiing, the skier is not in solid balance, not in contact with and in touch with the snow.

Note that at the high end of skiing, you will often see what looks like a lower hip at the apex, when the skier is at maximum angles, but that is not hip dumping - far from it. It's not a matter of a static final position, but of how the skier got there! 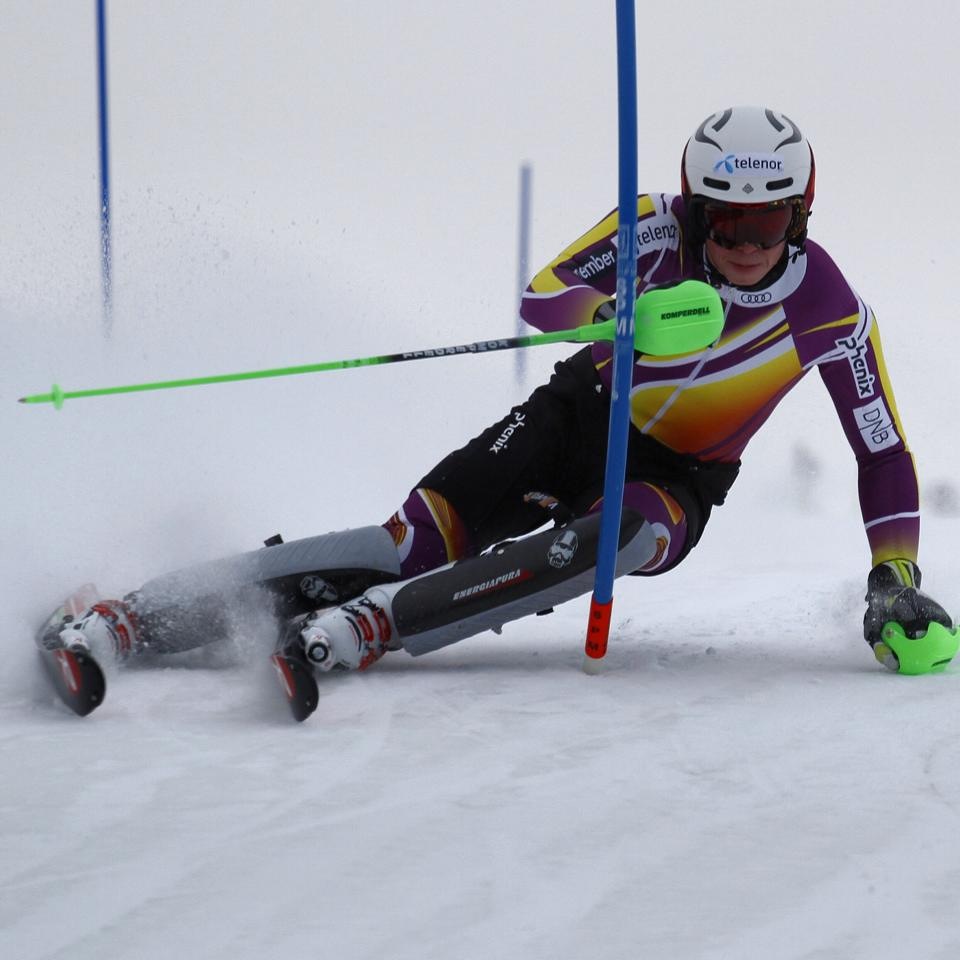 The biomechanics of high performance skiing are addressed in the topics at the black/expert and racing levels. See Hip on snow for high edge angles.

Put another way, hip dumping is when the hip puts the ski on edge rather than foot tipping. When the hip is the first to move into the new turn, dragging the skis on edge as a consequence.

When hip dumping, the hips (body/COM) are moving inside the turn too fast and/or too early. This is generally done with the hips on top of a long outside leg, as the skier's mass basically drops inside the turn.

It is ineffective because you're using the upper body to turn the skis rather than the feet and we established that's just not cool and you'll also have problems when the going gets tough like ice, powder etc as you have exhausted the range of motion available for balance.

Same skier, a year later, still a slight hip dump, but not a major problem anymore, much better angles reached with tipping from the feet and ankles instead: 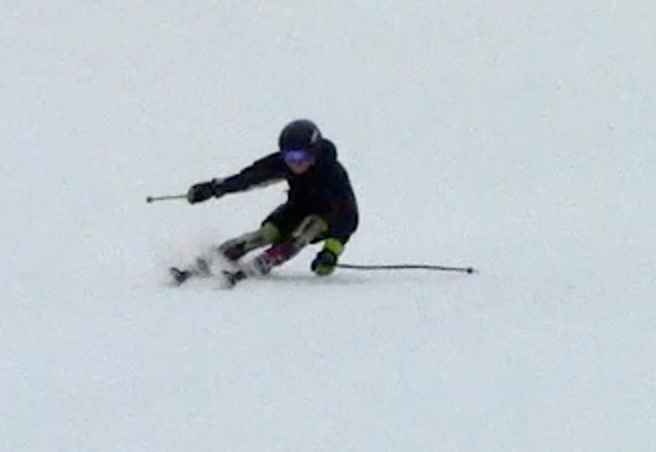 Most skiers use some form of hip dump - guess which of the two skiers below has the better initiation: 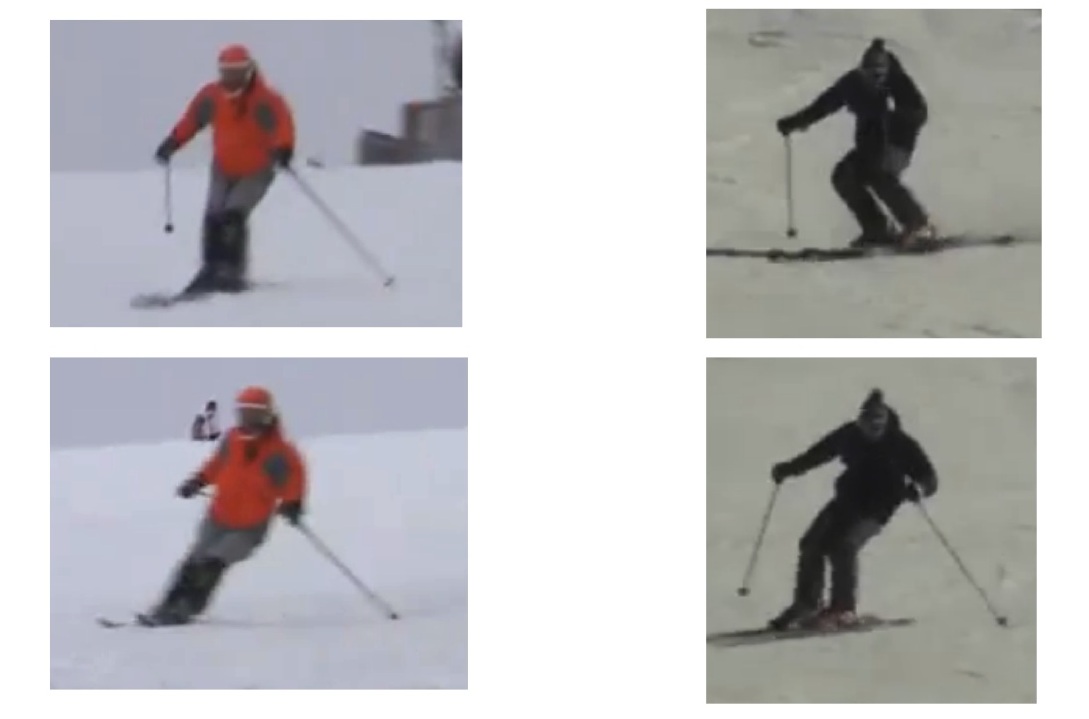 Compare edging from the hips and feet


Here it is in action: the skier's movement pattern starts the turn with a hip dump on top of a long leg, i.e. the first movement into the new turn is to move the hips instead of using the ankles and that is what drags the legs and then the skis on edge. The sequence to look for is this:

Note that we do not endorse the instructions in this video!

That's hip dumping and is very different from foot tipping. As you can see, hip dumping is also accompanied by Park and ride where the skier builds all angles at the beginning of the turn and just rides the skis statically around the rest of the turn.

Also, generally there is an A-frame as the inside ski is ignored and extra counter, to allow the inside hip to move in early. The outside leg also stays long, with no sign of flexing. Another sign of hip dumping is shuffling the inside ski forward and exaggerated counter-rotation of the upper body, which allows the skier to both lower the hips into the turn and retain some lateral balance while doing so.

Member-only content avilable (273 words).
To see more on this topic, you need a membership. (Member)

Another way to look at it, more visual: you are hip dumping in a turn if at any point before pressure, your hip is below the knee if you drew a line from the hip joing to the boot on the outside, as it is your hip leading the turn instead of your knees.

Here's a visual for that, together with more detailed biomechanics: 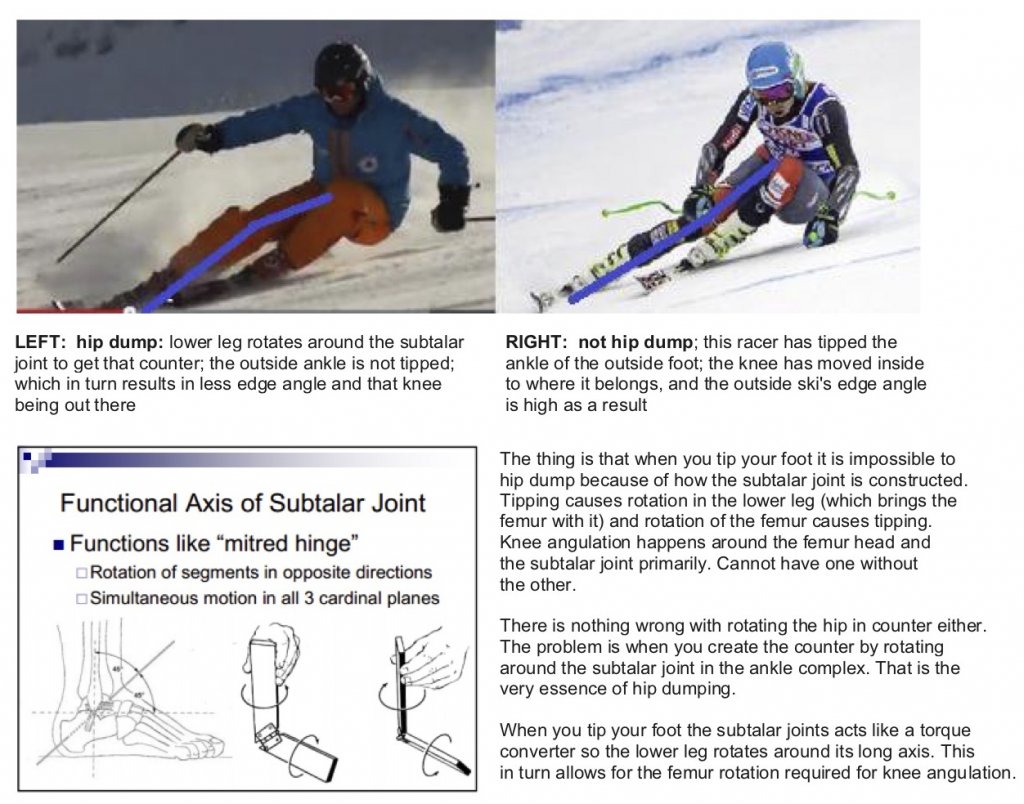 You can also see why hip dumping limits final ski edge angle, because it introduces an external rotation of the tibia, which in turn takes the ski off it's edge.

Member-only content avilable (127 words).
To see more on this topic, you need a membership. (Platinum)

Member-only content avilable (136 words).
To see more on this topic, you need a membership. (Basic)

See Tipping not hipping for ideas to addressing these issues.

Some useful drills and sessions:

Start fixing your hip dump Start the specific progression to improve this skill!
Was this useful?     Thank you!

I'd like to see your drawing of the physics of this.

Two points about hip steering: 1 It's the same as the static position when facing down a hill on a steep slope 2 If a skier doesn't move their hips to the inside of the turn then they are going to be banking their upper body, depending on speed and tightness of the turn, preventing separation of upper and lower body and inhibiting quick turns.

Hi John - thank you for the opportunity to update and complete this topic. I added a couple of videos and a biomechanics section instead of a drawing, because this is a dynamic concept, not captured well in a static diagram.

Hip dumping is not hip steering, but they are related, as they're both forms of upper-body skiing and we do not recommend that, as they impair balance. Skiers are well served by avoiding upper-body driven skiing like pivoting, counterrotation and instead focusing on controlling the skis with the lower body, i.e. foot tipping etc - that creates separation and good balance.

Basically, hip dumping and hip steering are the opposite of separation.

Sure enough - the hips need to be low and inside the turn, for edging to work. That concept is called "inclination of COM". It is critical to avoid upper body momentum (either up/down or rotational) for quick turns, so the way we achieve inclination of COM in high-performance skiing and racing, is by leveraging flexing. Here's Mikaela training GS, where this is quite obvious when the video is slowed down:

This is really good material, important material, and clearly explained. I recognize where you got the new "used with permission" part at the bottom. That was a good discussion. It's distressing to see the "ski instruction" video that you embedded, which I think would be really damaging to the progress of a lot of skiers. More than that, doing what the video asks could be dangerous, putting a skier in a biomechanically precarious place. Don't we tell new skiers, don't let your hips get below your knees, just give in and fall over to the side if that starts happening? Aren't we taught that this puts a skier at high risk of tearing an ACL?

Good points. I will put that paragraph about the video in red, to underline that it's not what we recommend :).

Indeed, allowing the hips to "fall" below the knees can be really bad for the ACLs, especially if the skis "grab" all of a sudden - I think we have several warnings about this throughout the website.