Early pressure is a term encountered quite often in the ski instruction world, but it may just be a bad advice, let's see why. The really critical thing to do at the top of the turn is to create big angles in preparation for pressure (both ski angle and body angulation) and if you instead extend the legs too hard to create and apply pressure too early, it will stop your edging, compromise edge engagement and likely cause a skid.

The top of the turn: to push or not to push

Screenshot from this video, youtu.be/Ga-6wy0Nboo?t=52

There are two basic reasons why you may hear this cue or instruction. One reason is an attempt to make sure skiers edge and engage the skis early, before the apex, as opposed to drifting them into engagement past the apex. Another is to ensure that racers don't delay pressure too much past the apex of the turn. This results in grinding the ski and reducing speed, among others. Additionally, some race coaches also think that pushing yourself down the hill is what makes racers fast, maybe forgetting gravity. Let's take a look...

So it is simply wrong to suggest to anyone to pressure the ski early before the ski is at sufficient edge angles.

The steeper the hill and the sharper the turn, the more edge angle is required to prevent skidding when you first pressure your ski.The Athletic Skier, Warren Witherell, 1994

If you don't have a platform (i.e. no engaged edge or no sufficient edge angles to support the coming pressure) and you push too hard, the ski is likely to skid. When you're skidding the top of the turn, there is less pressure available at the apex and then the bottom of the turn is usually a pressure hit and harder to control - all sorts of bad effects will happen thus if you pressure the skis before enough edge angles are created.

Again, your mindset should be "angles, angles" and not "pressure, pressure".

Also, when pushing into the skis, you're sending your body down further than it would go otherwise and mess with the turn shape - you'll have a harder time catching up with the body afterward.

Based on the first law of motion, every action has a reaction, and pushing into the skis early (i.e. when thinking apply or create pressure instead of letting pressure appear), too early before the apex, will have the effect of sending the hips up and down the slope (assuming at least some edge angles were developed by that point). This will, however, delay the moment where the skis come across the direction of travel, because you just altered the trajectory of the hips, so that will in fact occur later than otherwise and you may actually lose the ability to maintain pressure later in the turn.

It may help to think of pressure as $100 and you're trying to spend it throughout the turn: the more you spend early, the less you have to spend where it matters...

So, very counter-intuitively, focusing on early pressure diminishes the pressure available at the apex, which is required to get you from side to side (deflection). This results in grinding the bottom of the turn to get a deflection, fighting gravity, and slowing down. Ask your coach that question, next time you hear "early pressure".

Also, when you start applying pressure, the edged ski bends and turns, so the turn begins, you are set in a trajectory... so how early do you want to start? What does early even mean, when the presence of pressure makes the skis turn?

Double-turning is a mistake in racing. When the racer starts pressuring too early, the ski starts turning before the turn-in point for the desired apex and the skier has to back off and then re-pressure the skis later. You can see how that's a problem.

If you focus on pushing early, you will likely end up in a park and ride situation and just glide around the turn, picking up more and more speed in every turn, learn more with Speed control and carved turns.

However, many skiers simply skip the top of the turn and apply all pressure at the bottom, skidding past the fall line. In this case, for sure, the focus should be on applying pressure earlier.

A great observation from JF Beaulieu underlines the mistake that many advanced skiers do, which blocks them from evolving to making expert turns, see Receiving pressure. It underlines the fact that, at the top of the turn, pressuring the skis will slow down edging, when the expert skier is concerned with creating big edge angles, to later "receive pressure":

In the ski racing world, many focus on creating speed, so the external cue of "pushing snow up the hill" implies that we'd be pushing into our skis early when they're in the High-C and, while an excellent idea to get racers to start the apex earlier, it can easily be interpreted as "push" and "too early", both bad things.

If you look at a gates corridor, applying a lot of pressure before the rise line++ is generally a bad idea. At the same time, racers' brains like to exaggerate and hold them back off the edge of performance, so insisting on exaggerating this "early pressure" may be a good cue for some...? This has not been my experience, however, as it merely seems to reinforce the idea of "artificially pushing into the skis", which does not result in performance.

Again, however, it is important to not think of it as applying pressure but more like allowing pressure to build.

Here's an example of patience in the High-C - Ted in the GS Reference Turn++ is patiently creating angles at the top of the new turn, without any pushing of any kind: 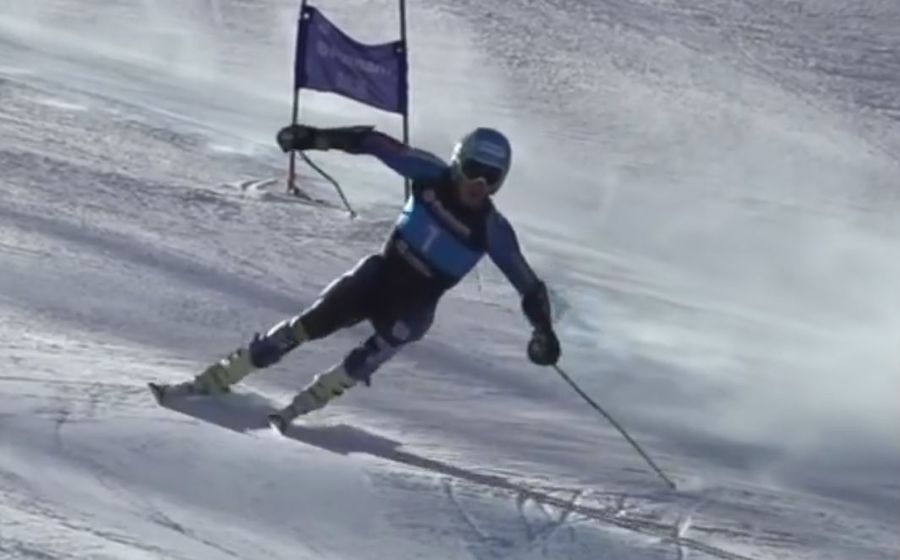 If you look carefully, you'll see some light under the outside boot - that's how gentle he maintains contact with the snow, without any hint of pushing... the ski maintains its camber!

One important concept [...] is to relax as I build up the angle. JF Beaulieau, Project 2016

JF Beaulieu refers to this as the "gravity drop", where the edging is achieved without pressure.

Establishing early balance on the new ski is a very important skill and it certainly implies keeping the ski on snow - but it is equally important to not equate this with pressuring the ski. I think this is where most of the confusion comes from!

Creating balance on the new ski requires engaging the edge slightly, but just! No heavy pressure and especially no artificial pressure (i.e. pushing into the ski). It is a higher-level skill to just maintain the ski edge engaged while creating high edge angles, without over-pressuring the ski!

Tactical situations may dictate a need to "skate" and push into the skis early, to generate speed, like on the flat sections of a course, out of the start, etc.

Here are some more mental models that can help get this point across to your students.

Think of pressure like a 100$ budget. If you spend it all at the top of the turn, you've got nothing down where it matters.

Also, if you don't give the skis a chance to dig their edges into the snow before seriously applying pressure, the edges will slip and the ski will skid - that's a big problem on ice.

So why do racers push?

Still, you will hear many racers, including Ted, saying something along the lines of "I'm trying to push as hard as I can, as early as I can". Why?

They generally equate pressure with pushing and were taught that. Also, "as early as I can" is not necessarily what you think... it's not an absolute geometrical concept, racers don't talk like that. It is however related to what the racer "feels" and they certainly know when the ski will skid if pushed around, so that's what they mean by "as early as I can": when the ski is edged enough to be able to take it!

A less common use is to use the cue of "early pressure" as means to get the racer to get into a position to be able to apply pressure forward on the ski. Although it is important to be in the position to generate tip engagement, it may however get the racer to focus on standing up from the previous turn, resulting in late pressure in the previous turn.

The coach should be careful to disambiguate and stimulate a healthy "forward thought". See Recentering, Fore-aft and Fore-aft and pressure.

If the previous turn was not ended with absorbing the forces at the end of the turn, with a Flexed release and you end up with a The meerkat move, that's another problem, somewhat similar to the "early pressure".

Once you have applied pressure and extended it at the end of the previous turn, the only way to get more edge angles into the new turn is by waiting for the hips to drop (if the hips were already low, you would not need more angles). See Inclination vs angulation.

Here's a good demonstration - the skiing in the video is pretty bad, but even as the coach noted, as soon as the skier stopped kicking his upper body up and "forward" every turn, he got bigger angles and earlier pressure.

Most of the time, the reason "early pressure" is used is to get the skier to tip the skis on edge and engage them before the fall line. Skiers subconsciously know the ski needs edge angles to apply pressure, so there you have it. That doesn't make it a good cue, just coaching the outcome, which we consider sub-par coaching. Using cues like Upside down, patience, Receiving pressure, etc is much better, as they focus attention on the right things.

Normally then, we focus on being patient at the top of the turn, gradually increasing pressure to engage the edges, but the peak of pressure should be around or after the fall line.

As a racer, you can develop big angles very early and then you will indeed, receive pressure from the skis just before the fall line and create some of that all-important speed, but only provided that you had enough momentum across the hill and you had enough patience to get to the proper turn-in point for your line.

Early... you can have pressure or angles? You will have to choose one! With pressure, you can't create angles and without angles, the ski won't hold the pressure.

Avoid trying to create pressure early, unless you have developed the massive angles already and are ready for the pressure.

It is "traditional" or "dogma" then to teach extension, especially to beginners and GS so that the skier can more easily access the front of the skis,

which means that when they arrive in the program new race kids have this as their default method of initiating, which produces the Meerkat Move, right?

Indeed - some coaches are careful to distinguish "up" from "forward" or "down the slope" but all these thoughts of pushing just direct attention to the wrong place and movements.