This skier below is not bending or carving the outside ski. Let's see what that assessment has to do with our inability to develop good racers:

We figured we should label the outside and inside skis, for clarification... if you're interested to find out more about assessing outside ski carving at high edge angles, see Weighting the inside ski and high edge angles - hint: ski bend indicates balance, pressure and ski-snow interaction or "carving" and you'll see the turn shape soon enough!

The skier above was assessed during a recent coaching course as basically a beginner level (acquisition - where the skier understands but demonstrates the skill inconsistently), in these areas:

He was also told that he is not actually bending the outside ski and is not getting performance from it!

Just for clarification, this run below (where the snapshot above was taken) was filmed the day after getting that assessment, without any instruction or work on any skill whatsoever - the same skiing and carving he performed in the course, the one we'll focus on:

While far from perfect and with some clear deficiencies, if this is "beginner" level for carving and balance, I'm not sure what colour mustard is like... but we'll get into those 4 areas below and take a closer look.

Let's take a look at each of those "skills" being evaluated.

While for recreational skiers, using all joints is a concern, when evaluating a racer, because they normally have the basic technique down and they are more athletic, this is usually code speak for getting forward and using the ankles (dorsiflexion). The skier must be flexing and extending as needed to get the desired turn shape.

Racers need to move along the ski, in order to create or control speed and manage the larger forces they generate.

A former FIS racer, our skier is able to move along the ski and get forward as needed, as well as use all joints well,in all planes, flexing and extending as needed. You can see below how the ankle closes in transition, to re-balance forward on the ski, easily visible when looking at any turn from the side: 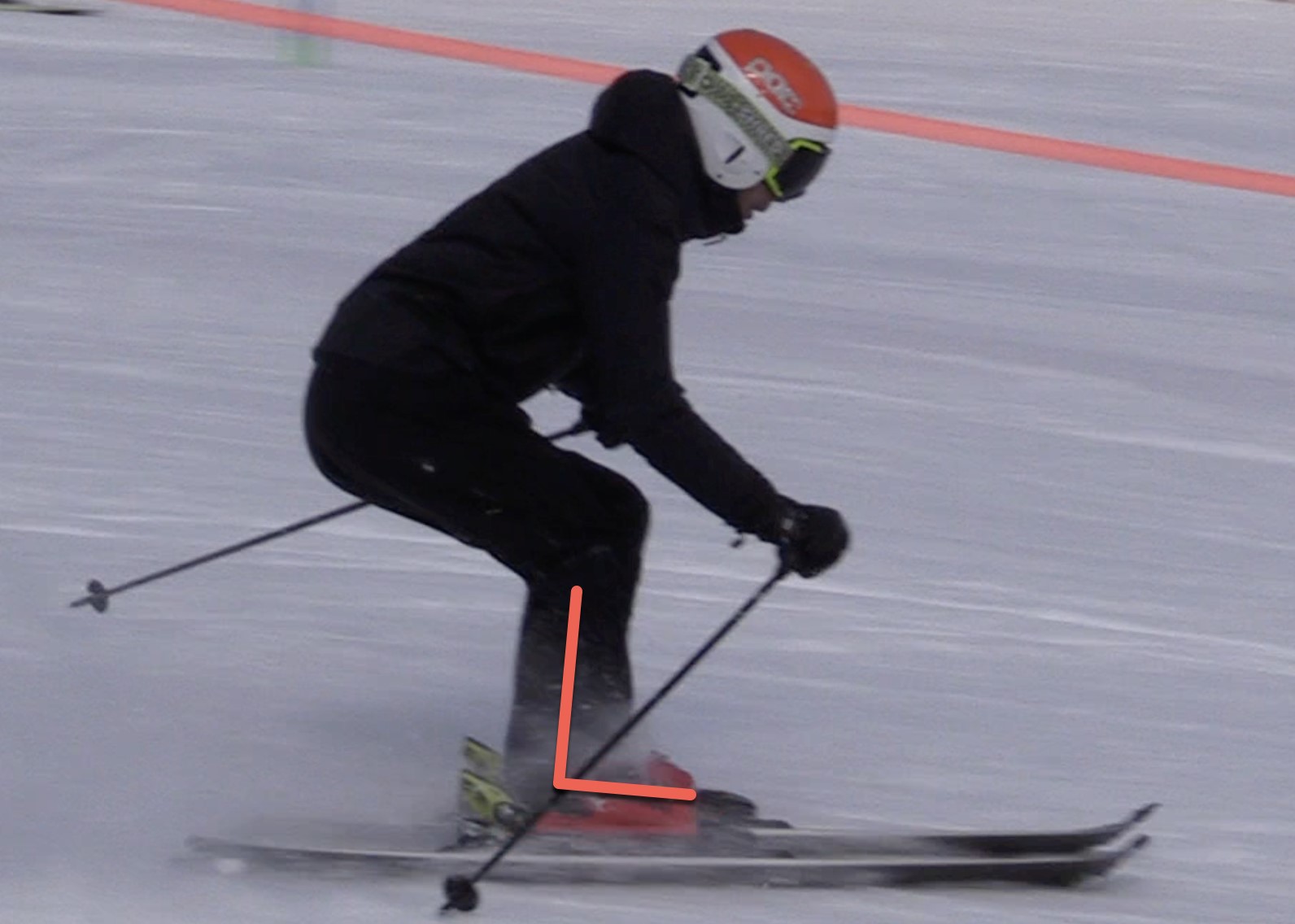 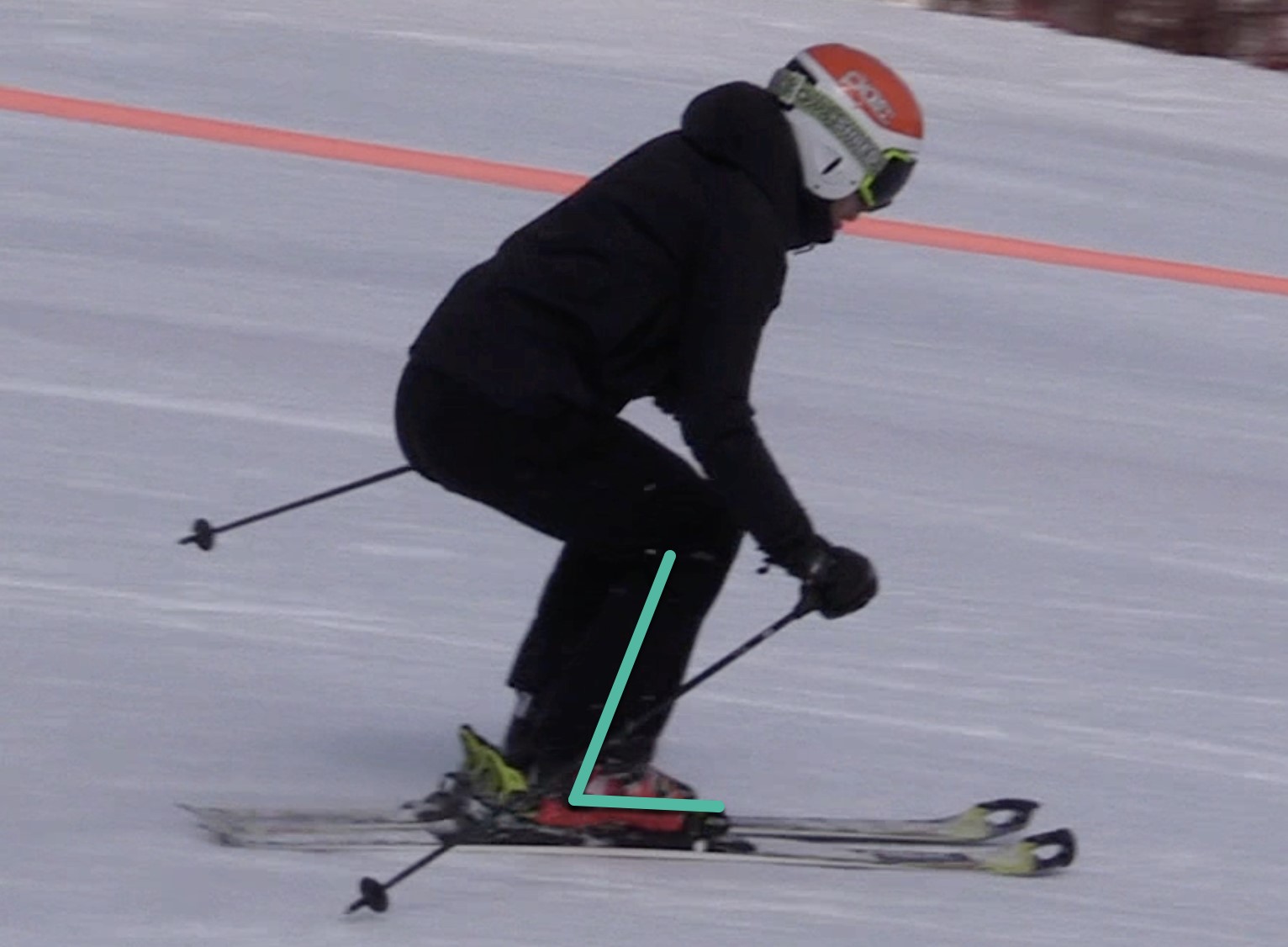 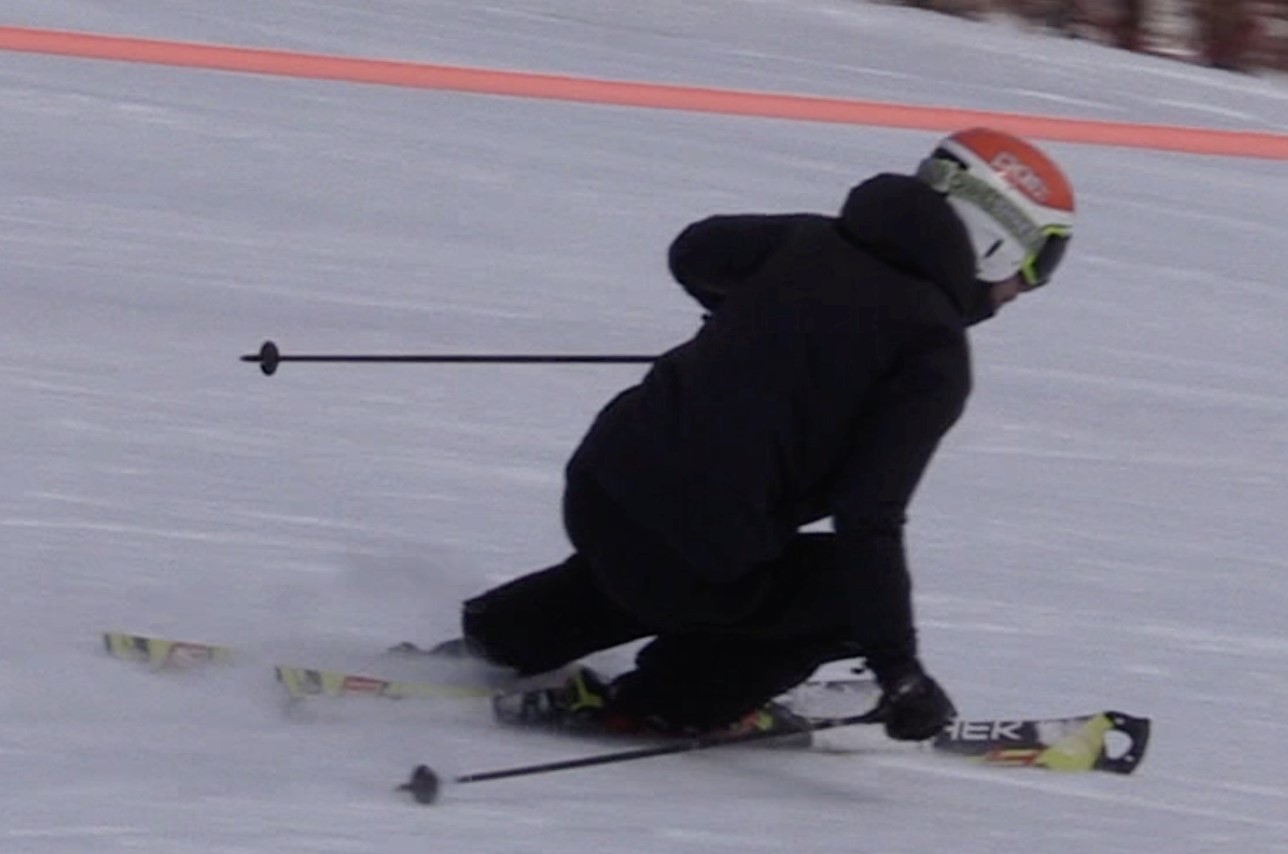 Ideally the leg would be longer in the last image, but he was squeezed between the camera and the orange ribbon there, so we'll look at the other turns and see that it is long and the ankle is "closed" - also, the way the outside ski bends, more in the front of the binding, tells us that he is more forward than not at that point:

He indeed gets carried away with the power he can generate and gets bounced off the snow every now and then, but he's in complete control and the next turn looks very much like the previous, for a consistent turn shape and performance.

Carving and bending the outside ski

I don't think that anyone looking at this snapshot can say that the skier is not carving the outside ski effectively? Our racer was very unequivocally told by the examiners that he is not in fact able to bend the outside ski and he is getting no performance from it. Looking at the snapshot below, do you think the outside ski is bent a) a little, b) a lot or c) not at all?

Directing most pressure to the outside ski is clearly visible above - at those angles, there is nowhere to hide the inside ski and even so, we can see that the inside ski barely bends, so there's barely any pressure on it.

Let's say that the coach is not experienced enough to see the ski bend in real time... any coach that has coached a slalom racer would know that there is no way to get the turn radius and offset (deflection across the hill) that our ex-racer gets in the first section in the video, from a slalom ski, if the skier was not carving the outside ski and bending it a lot!

This one is perhaps harder to gauge... it basically means that the skier can reasonably stay on top of the boots, in balance, while moving over terrain. While, for recreational skiers, aiming to stay in the middle of the boots can be ok, for racers generating large forces and big angles, moving fore and aft along the ski and in 3 dimensions, is normal. No racer stands in one place on the ski during a course.

Our skier displays good balance, moving fore and aft along the ski as needed, to control the ski, generate and control speed. Balance on the outside ski is also clearly visible, even at those angles he's skiing at, in each and every turn! He sometimes gets bounced off the snow because of the performance he is able to generate, we'll see a couple WC racers do the same thing, below.

Our racer was also told (and so was his coach) that he is not using the same movements and biomechanics as WC racers, in a slalom turn. Let's take a quick look at that:

As you can see in the video, our skier on the right uses the same movements and biomechanics as the best racer in the world at the moment, Marcel Hirscher.

Let's look at a few places in the turn, to assess those differences:

When looking at this, you should compare the stance in transition, the angles, carving the outside ski, the amount of counter at different places in the turn etc. As an aside, while many professionals would tell you that Hirscher is stivoting and pivoting, nothing is further from the truth - at first sight, it may seem that he is stivoting the skis, but if you look very carefully, in the sequence above - he throws just one stivot, in the second right footer. In all other turns, he goes to great lenghts (literally) to avoid pivoting the ski and keep it caving instead! The slight redirections that are visible before the ski is on snow are due to the biomechanics of extension.

And, tactically, that is the one glaring difference: Hirscher is cutting the top of the turn every now and then, with a quick and small redirection, since he is constrained by the timing of the course while our skier carves very clean tracks, as he is free skiing... also, our skier is lazier and fatter, over-rotates on the right foot, keeps the hands in his pockets and uses the left hip too much etc...

But this is critique on the margin, for the given purpose of assessing the basic turn mechanics of a racer. To judge whether the skier on the right lacks the basic skiing fundamentals of a WC slalom turn, as he was told, I leave that up to you!

Here's another comparison, with a current WC skier during a recent tech training block, on the left:

And some stills, in a few places in the turn, to assess those differences: 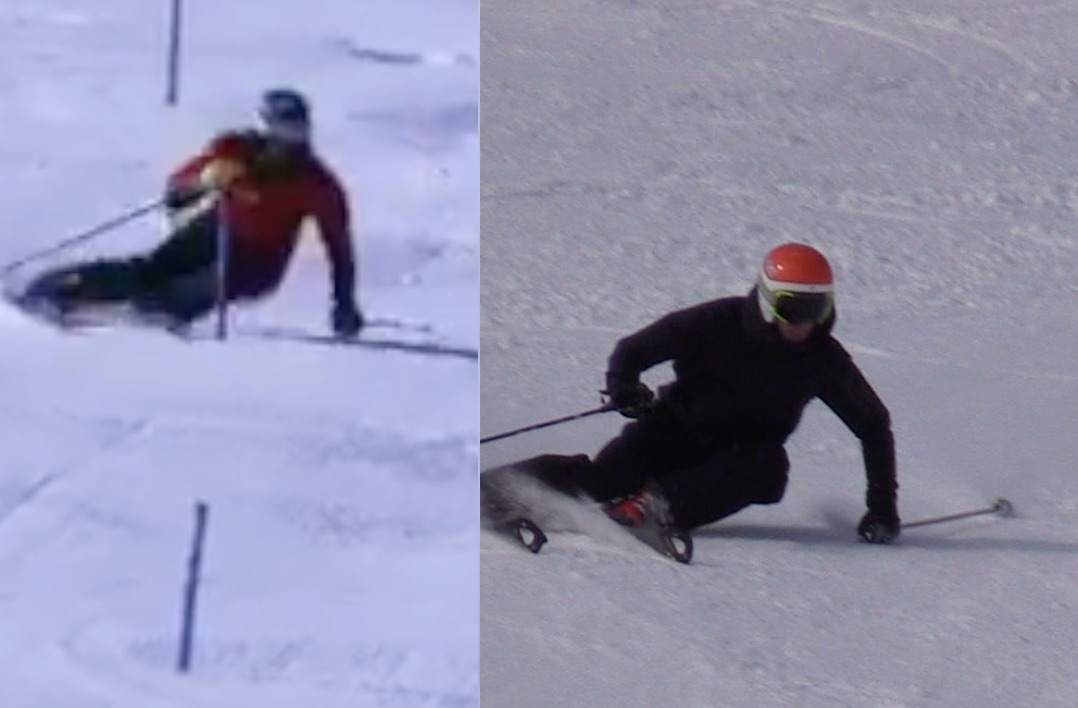 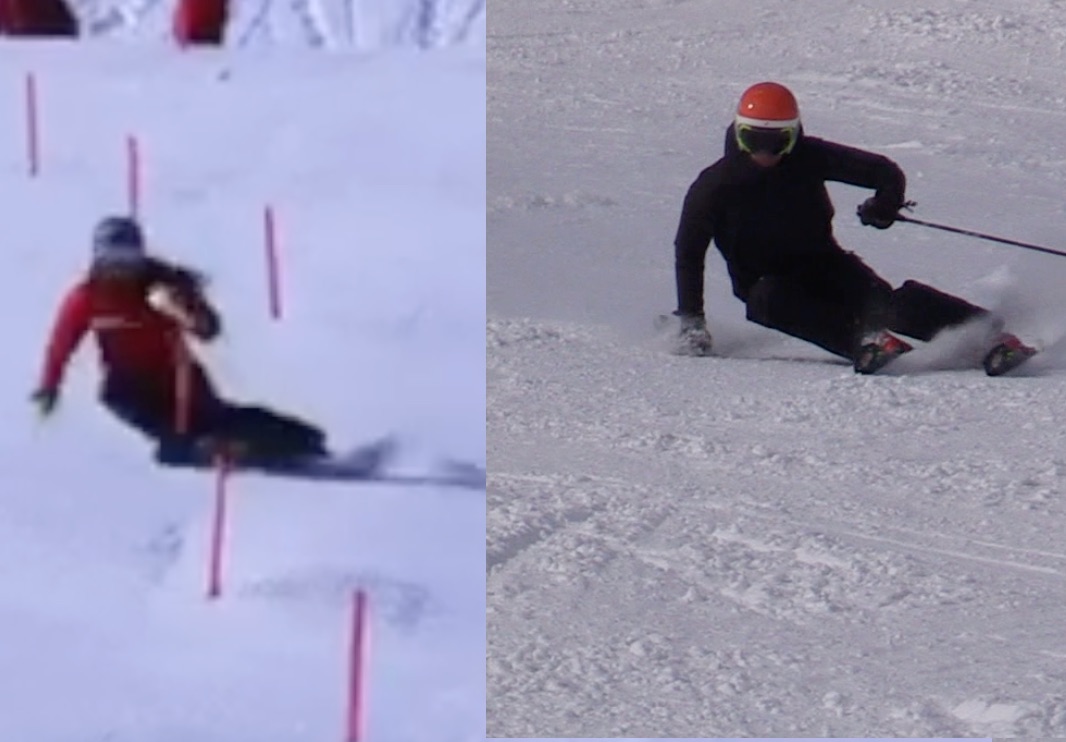 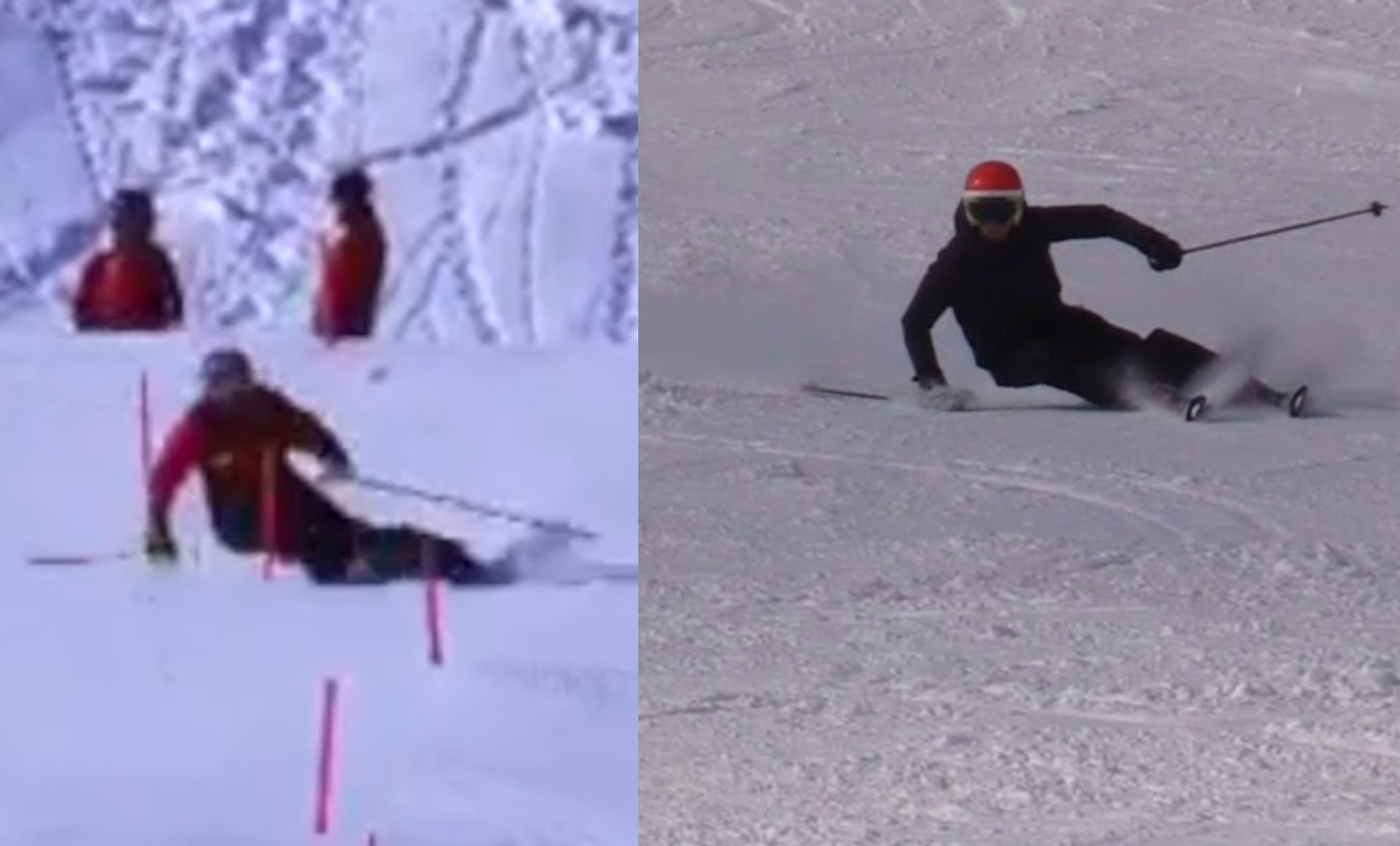 Does it look like proper WC technique...? A lot of similarities and also some telling differences, for sure! Is the one on the right carving the outside ski at a beginner level? What if you account for the fact that the racer on the left spends many hours in a gym, regularly and well over 100 days on snow a season while the one on the right has not seen the inside of a gym in 2 years and has spent 10 days on snow in the past 2 seasons?

Let's take a look at athlete development. How do we improve athletes and skiers?

For instance, let's say that this athlete is not pole planting nicely:

How do we, as coaches, get him to pole plant better? Let's do a quick coaching exercise here and see how quickly can we get this one to pole plant...

One simple thought is that we might give him a task that requires pole plants and see them appear, if the athlete did have the knowledge. This video below was filmed the day after "the" course, with no talk whatsoever on pole plants, he was just asked to do short turns (which don't really work without a good pole plant). You can see a good pole plant magically appeared in the first attempt (ok, there's no magic trick, those short turns don't really work without a stabilizing pole plant):

Or, as good coaches, we may simply give the athlete the feedback / direct instruction, in a way that gets "through". This is the same athlete, after being given a two sentence written feedback from another coach, good quality feedback and then working on it for 2 runs one morning. Here is the result, when back on snow, two days after "the course":

So that is how we develop an athlete: task, reflection and feedback, understanding, modelling etc. Uncoachable athletes are often shunned for good reason because you know they won't develop well.

The coaching simply has to rise to the level of the athlete! To have this level of athlete for 4 days on snow and not be able to make him pole plant better in a few runs... or making him or her show whatever was needed to pass a low level coaching course, that says more about the coaching quality than about the athlete's ability! There can be many causes for this: overwhelming the athlete with confusing feedback, using wrong cues, an inability to establish a trust relationship/teaching contract with the athlete etc.

In honour of this memorable failure, we created the Ski School Dropouts level on our website, realizing, as others did, that to evolve to the highest levels, one may have to leave the confines of this or that organization and just focus on improving the skiing as opposed to trying to fit the skiing into an artificial :"style" or standard "of the day" in this or that territory or country - here we are focused on Creating great skiers with a focus on technical skiing, regardless of... "style" or "look", just effective biomechanics! so, if you're a good skier and want to ski more like the skiers above, apply for the Ski School Dropouts!

Canada is ranked 11th in the Nations Cup. The leading nations, Switzerland and Austria, have miniscule populations in comparison. Canada has a population five times larger and has more FIS licenses than either Switzerland or Austria. Why can't we develop good racers? https://skiracing.com/top-rotator/fall-line-exploring-north-american-development-what-are-we-missing/

In over a decade of coaching, I have not seen a single coach training Flexed release, at any age group, up to and including FIS. Some of the better coaches allow it to appear when the athlete starts figuring it out on their own, but none coach it, because they simply don't know how. "Up, forward and pivot" (or The meerkat move) is the main coaching method, with the obvious results and it creates a focus on pushing and skiing with the upper body and a complete lack of understanding of what the lower body is for... most coaches will get athletes to stand up when they see them low - because they associate that with "being back" - and many will get them to rotate when they see them counteracting because they associate that with hippy. Thus 3 of 6 or 7 relevant movement categories are not actively coached and in many cases actively discouraged - the damage this does at the lower ages is incalculable, as many North American athletes grow up with both hands tied behind their backs!