So? Before we answer that, what do you think? Let's frame the question first: you're at the apex of the turn, outside leg long and strong, hip to the snow. Let's look at this one first, it's more black and white than other situations would be:

Long strong leg at the apex

What do you do from here?

If you do nothing, the leg will stay long and strong and the hips will be sent up and over. 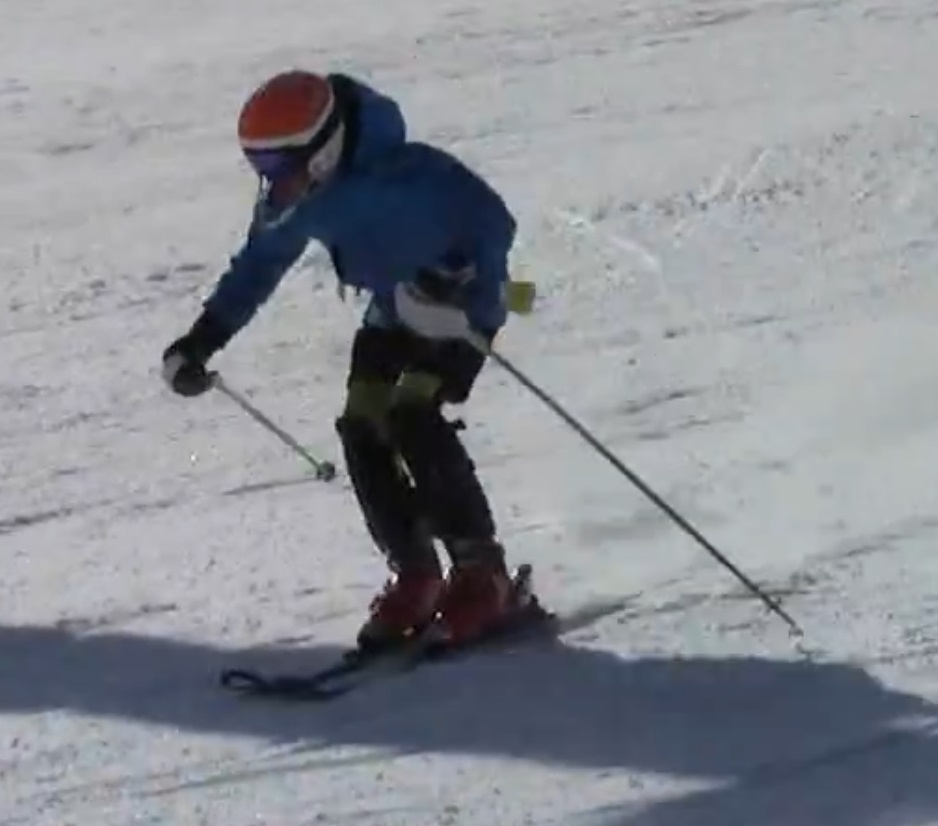 Is that a release? Not really, not in my mind. Yes, the ski does disengage from the turn, but that's not because of something you did, not because you caused a release, it's just because the hips were sent up so high that the leg came off the snow. The skier just above was good enough to not let the hips drag the entire body so far up that the skis come off the snow, but that's not that relevant, as he's now at the maximum range of motion (legs cannot really get much longer) so he cannot engage into the snow until much later, when the hips fall "back down". So he could get away with this in longer turns, where you have more time to re-engage the ski.

Think about movements, we're movement or "input" oriented. What did you do? Nothing, really. You statically stood on a long strong leg until you blew up. No movement, no action, no input. Everything was already set in motion and you just did nothing else.

b) Flex the leg and release

What can you do to prevent that hop and disconnection? You have to flex the outside leg, to allow the ski to disengage and release from the snow and stop turning. How do you flex the leg, full retraction or just softening the leg or relaxing, what do you relax and in what order you relax those parts that you relax? That's another post for another day, but for sure you will have to flex that long outside leg, it has to change from long to short, so you can release the ski.

It seems this post triggered a fair amount of controversy, because of some bias against expressions like "flex to release" and because many seem to take issue with relaxing, especially racers.

Imagine a weight lifter during a squat - he or she would be much less relaxed during the flexing phase of the squat than when standing on a stacked long leg. Nevertheless, their movement is still "flexing", followed by "extending". Similar in skiing, it would certainly be more tiring to flex slowly during a fast high energy turn, where the skier may have up to 3g or support three times the body weight, but certainly doable. Good training too, if you don't have weights ;)

A release can have many variations, from relaxation to a full on retraction, from a tiring but slow flexing of the legs to a softening of the legs and each of those may have good reasons depending on the desired outcome or tactics. In fact an uncontrolled relaxation would be too violent for most turns. The point of this article is to discuss how and when to let go of the turn and release.

The reason we call it "flex to release" or a "flexed release" is:

So although it plays it's part and it's very important in practice, don't focus exclusively on the relaxation. Focus on the shortening of the leg - that's a movement, an input.

Now let's go back to the apex: long strong outside leg, hip to snow. You now relax the long leg, collapse it and let it flex. What happens? You slide to the outside of the turn (or tangent, it's more complex), but anyways, you slide on your butt. Yup, that's all that happens, no joke. Well, mini-joke.

What you do instead is this: you keep that leg long and strong until the ski turns enough. At that point, the ski comes out of the fall line and across the line of travel, between the hips and the down-the-hill direction. If you do nothing, the hips will vault over the leg.

Flex and shorten the leg! As soon as you start to soften and flex the outside leg, the ski will stop turning and will start the release process. The turn is over, the hips stop moving "up" and you transition over to the new turn, cross-under style. 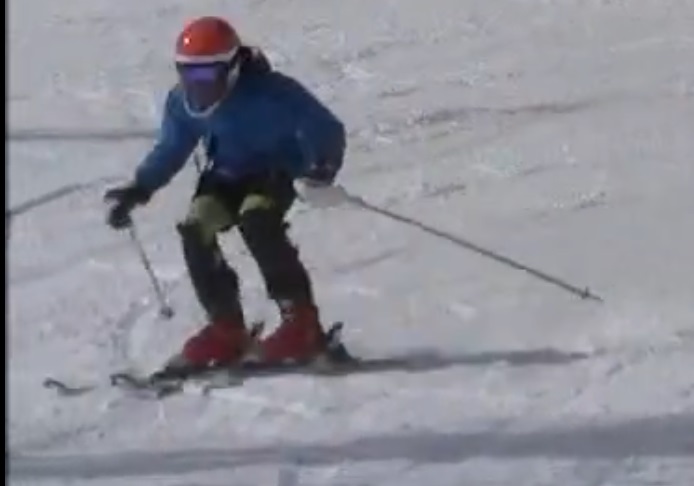 The opposite of hop and over - relaxing and flexing to release

This skier, in contrast to the "hop and over" one above, has full range of motion both up and down due to the legs being shorter and can control the ski engagement at will, i.e. very early into the next turn!

Releasing via flexing the outside leg, sometimes referred to as down-unweighting or retraction was (still is?) a hotly debated topic, ever since Joubert's book presenting avalement but it is so prevalent in today's top skiers that a debate is moot, see Low in transition. The how and when are more interesting topics!

If not done properly, the flexing will induce some artifacts (like being back, squatted with less range of motion etc) which the skier needs to know how to prevent and/or deal with. This is why many coaches don't coach this movement, because they don't know how to deal with the likely side-effects which will appear as soon as they start working on this. In turn, they're happy to allow it to appear in some strong skiers, which discover it "via luck". Many other skiers do not discover this, so we think it's much better, overall, to educate coaches and learn how to coach it effectively.

GS is not really much different from Slalom. It takes more time from apex to apex, so the skier requires more impulse to get across the slope, so let's look at when to release and how fast to release.

Well, so the first question is: how fast do you soften or retract and flex that leg? Do you do it instantly? We know from Einstein that nothing is instantaneous. So it takes a while to shorten it. Can it take longer? Sure, nobody says to get flabby, collapse and give in... in fact it can be a technical mistake to collapse too quickly! Take as much time as you want. The only problem is: as the leg flexes, you have to use more muscles to support yourself, so the longer you take to flex under weight, the more tired you'll get.

Getting tired is most often a timing issue: if you time it right, you got most of the required impulse when the leg was long and stacked and then you're just floating while transitioning, so you would release without that much lower body active effort.... so let's look at the timing.

The next question is: when do you flex to end the turn? When do you let the leg flex to release the ski? That's the thousand $$ question, isn't it?

Answer: when you need to! There is no simple and fast rules about this and no two turns are alike. The longer you keep the leg long, the longer your hips are impulsed up and the more danger of being sent up and disconnected from the snow. At the same time, as you start to relax and release, the ski stops turning and you stop getting impulse from the turn, to get either forward or across the hill...

So when? When you need to or when you decide to, plain and simple. You will let the ski turn as much as needed, you will get enough impulse to send your body across the slope and into the next apex as needed and when all that is done, you relax and flex. Remember it's not instantaneous, so even that takes a while... this is the art of skiing, the tactics, the timing.

Let's look at this release from Ted Ligety:

You can see how the resulting force (the centripetal force) changes in direction and intensity throughout the turn, as the skis engage, turn and are being released:

When should Ted release? The answer is: whenever he needs to, in this example, likely just before frame b) where he seems to already be flexing and bending the outside leg. If his leg were long in c) it would have been way too late and his hips would have already shot up way too much and he would be disconnected from the snow.

Pushing vs resisting and giving in

Some think you're pushing at the apex. I do not think so. It certainly feels like you're pushing, because of all the forces and the pressure and the body tension. But in reality, you're not pushing anything. Pushing requires extension but your leg is already long.

You're resisting. That is the better way to describe it. Like you're resisting someone pushing you, rather than you push something. See Resisting the pressure.

When you need to end the turn, you need to relax and you're giving into the forces. Which forces? The ones you allowed to be created: the more the ski turns, the more the vector of the force changes and pushes you back up the hill. So the longer you resist, the more down and across the hill you go. Well, you also slow down a lot in the down the hill direction, because now the force is pushing up the hill (you're now grinding)!

So - again, when to relax? Well, if you're a racer, not too late, because that either slows you down and/or sends you up too high (if you stand on the outside leg for too long - also generally called grinding the bottom of the turn).

Interesting fact: the best cure against grinding the bottom of the turn is working on flexing and releasing, not just on engagement - letting go is the hard part. Food for thought.

The feeling and action of "giving in" can be described as toppling.