Part of the Projected productions - How to Ski series, "Resistance" is an episode from JF Beaulieu, on resisting the pressure building up underfoot, so that you can get direction (i.e. have the ski turn). The series (as well as anything coming from Projected) is highly recommended, with lots of good thoughts and discussions of concepts at a higher level - here's the trailer:

After the shocking trailer which sounds initially like heresy (working on avoiding big angles???), JF makes a good presentation around resisting the pressure building up under the outside ski, with a long leg: the timing of it, the how of it (receiving pressure), contrasting the long leg at the apex with the short leg as expert skiers are releasing the ski.

JF makes a lot of good points, underlining the differences between skiing in compression and receiving pressure versus giving pressure and between intermediates using too much up and down versus collapsing the outside leg and flex to release.

Looking at the timing of this resistance in relation to the turn tactics, there's a lot of good discussion there and totally worth the price of admittance, especially when you add some ideas to work on these concepts!

This is a good opportunity to revisit some other interesting points about managing pressure at the expert level, especially around the mechanics of the resistance and speed control and other advanced technical elements that come into play when focusing on bending the skis, to continue evolving as an expert skier!

If you stand correctly on your skis, they will turn for you.How the Racers Ski, Warren Witherell, 1972

However, while not quite "angels vs demons", there is a certain contradiction between angles and pressure: when pressure appears, it reduces angle creation! See a larger discussion at Tipping and extending. 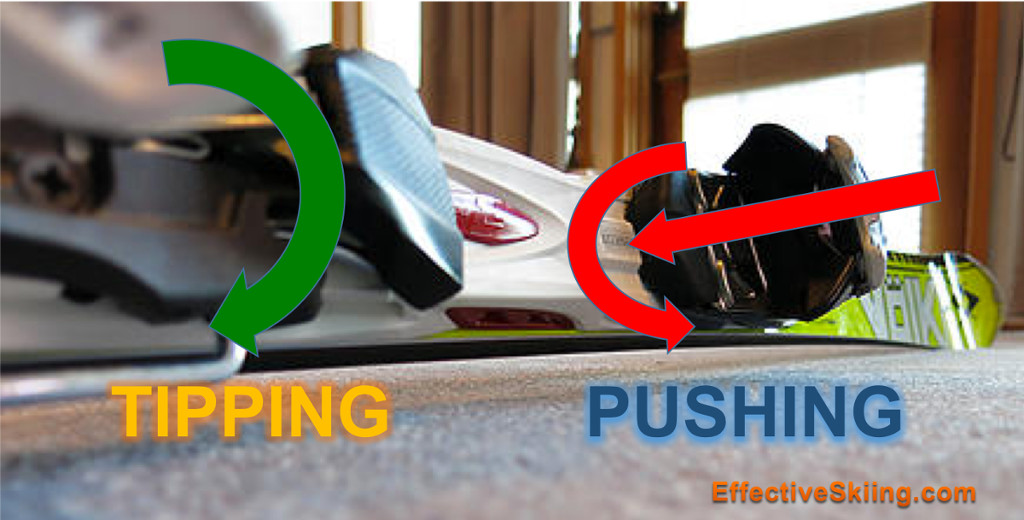 JF is acutely aware of this and often talks about "gravity drop" and relaxation and not skiing "in compression"... but of course that, at some point, the pressure does appear when the ski engages properly and we need to use it, to get deflected across the hill, at least at this level: the ability to consistently carve with offset is, we think, the first trait of an expert skier and it's usually achieved initially with standing on the firmly engaged ski.

Besides looking at feelings (pressure) and outcome (deflection, direction), when looking at the movements that the skier does, as we generally prefer to, the point is that the extension of the new long leg into the new turn must be "passive", i.e. the skier must not push at all against the snow (as JF says with a beautiful Quebec accent "to not give pressure to the mountain") but extend the leg so the ski just maintains a connection to the snow and, again, not try to - as some race coaches without a carefully developed vocabulary are fond of saying - "push down the hill".

Resisting is not the same as pushing!

Member-only content avilable (158 words).
To see more on this topic, you need a membership. (Gold)

There are detailed sections under:

In terms of sessions to work on this, look into:

An outside ski bias tends to make one quick to default to pressuring the ski and ski "in compression" like JF calls it, an over-reliance on "brute force" to bend the ski.

Member-only content avilable (87 words).
To see more on this topic, you need a membership. (Gold)

Develop these skills with:

Another big issue is how do we resist? How much? How long? Do we grind the ski to a halt? Is that speed control? Is that what we require to get more direction?

Beginners and intermediates get speed control on the steeps by skidding into small hockey stops, while experts typically get it by grinding a loaded ski in the bottom of the turn. This approach works reasonably well for most purposes, except is slows down the transition and the tipping the skis into the new turn and, for many, results in a botched release.

To evolve as a racer and grow at an expert level, more mechanisms and versatility can be developed and some these are very counter-intuitive and hard to learn. They require an even softer approach and good levels of balance and strength, which take serious dedication to build (see What does it take to ski like the best).

Member-only content avilable (153 words).
To see more on this topic, you need a membership. (Gold)

Speed control is one of the basic skills of skiing! Read more and work on this:

Resisting the pressure is a necessary part of expert-skiing and refining it can take one from advanced towards the expert skier status. Getting the lateral impulse to go across the slope is a requirement for racers, too.