I hear this coaching cue every now and then and we should take a few minutes and think about it, because it may not help create the best mental models for your skiers and athletes. I think it denotes a misunderstanding of ski technique and of the basic physics of how my beer fridge moves through space-time!

As good coaches, we must be careful about the mental models we create in our athlete's minds and, as we'll see, this one likely causes more problems than it solves. 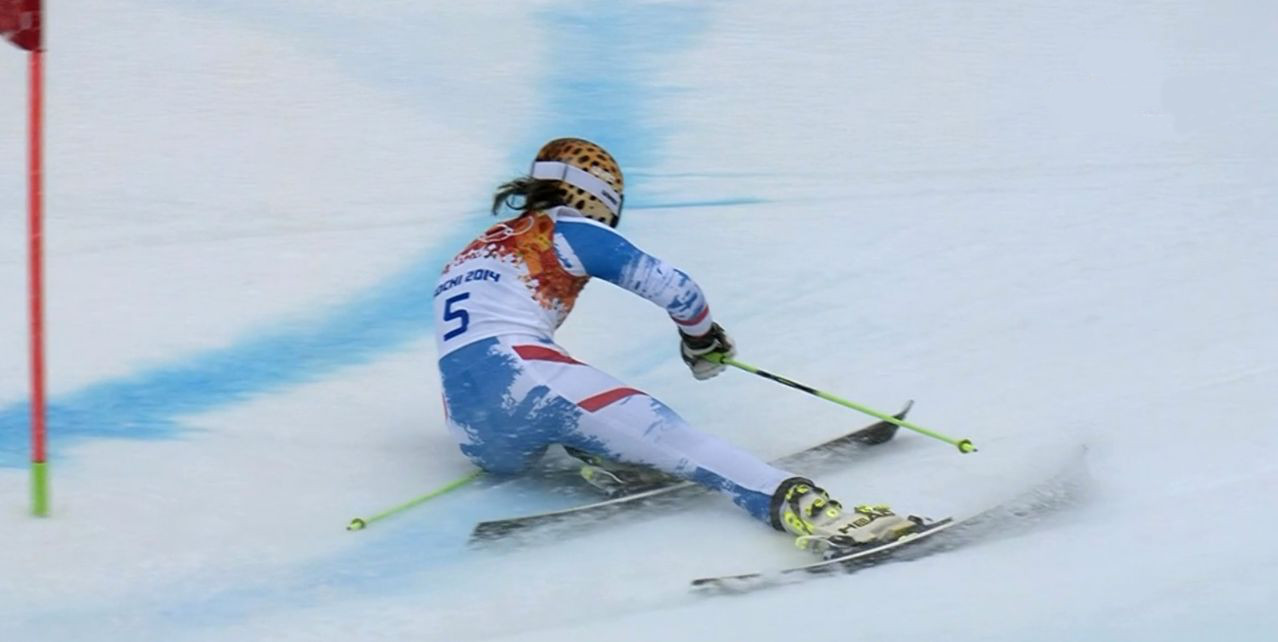 Knee to front of the boot at huge angles

What do you see here: pushing the outside ski forward? Pulling the inside ski back? Keeping the boots together? Or do you think she's not doing anything special in that direction?

There are a lot of negative implications of the skier thinking push the outside ski forward:

Let's look at a few of these below.

Whenever I push something, by definition, I am behind the thing that I am pushing, at least in the direction that I'm pushing it in.

Take a minute and breath that in! Here's a more down to earth visual model: whenever I push my beer fridge around, I'm always behind the beer fridge, looking from the direction that I'm pushing it in!

Thus, by the exact same definition, if you push the outside ski forward, you are behind it - i.e. back!!!.

Sometimes, the argument is that: well, the turn ends anyways - you could be back! Nothing could be further from the truth. Pushing the ski implies the presence of pressure, meaning you'd still like it to turn. But, as soon as you get back on it, the ski stops turning, because you just lost the sidecut!

It is pretty hard to push the outside boot forward (from the hip) while keeping the hip back from rotating into the turn... so this may also introduce a focus on pushing the outside hip forward, which usually results in a rotation of the upper body.

This has all sorts of other negative influences on the turn performance.

Also explains why you're out of balance

In the forward direction, the ski is gliding on snow. Now, imagine you're sliding on ice and you're trying to push the feet more in the direction that you're sliding! Do you think you'll end up out of balance and on your bum?

YES! That's the most likely outcome... and the exact same thing happens if you focus on "manually" pushing the outside ski forward!

There are other, more subtle negative implications of pushing the ski forward, from being on the heels to delaying the release.

There are a few reasons why you may hear this cue, most commonly to prevent an excessive shuffling of the inside ski, which also puts you back and out of balance.

For the reasons we've seen above, if you're going to do anything to maintain balance on the skis and focus on the boots during the turn, a better cue is keeping the inside boot back. A ton of advantages, comparatively:

Keeping the inside boot back and keeping your feet together will keep you more forward than otherwise... you can try this right now, standing up: tension your legs so as to pull your heels back - the hips will move forward as a result! We call this action-reaction, the basic principle of physics.

Also, it will keep you in balance and full control of the boots, as you're keeping your boots underneath you - this is the universal principle of skiing and especially racing!

Did I mention that one obvious outcome of keeping the inside ski back is also Dorsiflexion and Shin pressure? Both good things, as we know - while pushing the outside ski forward opens the ankle and loses shin contact.

There is one possible drawback of focusing on keeping the inside back and that is keeping the inside hip back with it and rotating into the turn through the bottom of the arc! You need to be aware of this and avoid doing that - since the inside leg is normally bent a lot at big angles, the tension or the effort should be at the lower leg level, not at the upper leg or the hip!

Let's think for a second about... well, doing nothing! Don't push your outside ski forward, don't bother trying to keep your inside ski back... nothing other than standing on the outside ski.

Does that mean you have a limp inside boot? Will it float and bounce around? Yes, likely. Some tension is important for good skiing!

This is the equivalent of shortening the inside leg at big angles - big angles will introduce a big vertical separation between the boots (so you don't "boot out"): 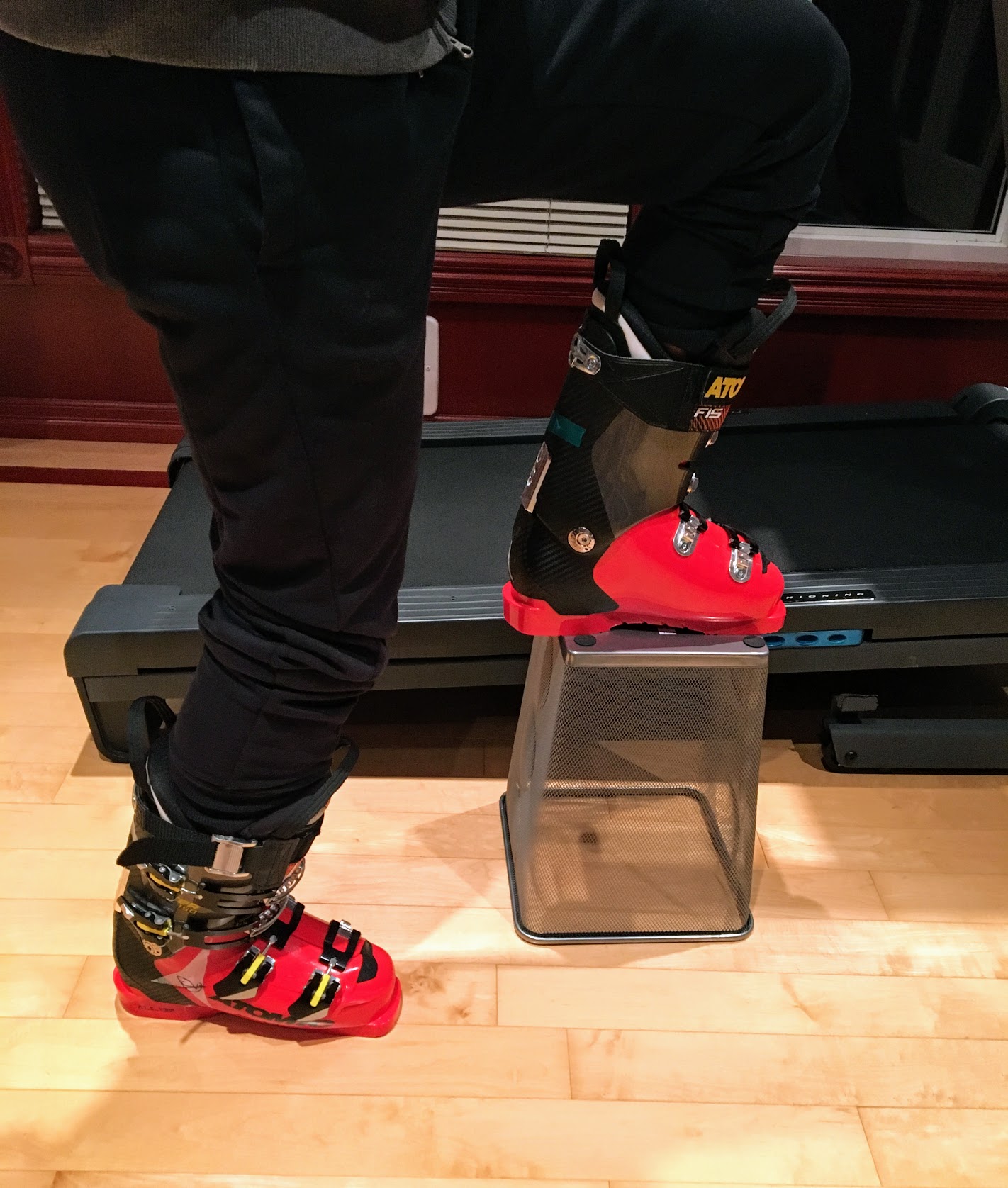 So, if you do nothing about it, it will move the inside boot ahead, throwing you out of balance and back! The obvious fix: keep that inside boot from shuffling forward!

Our cue on this is to keep your feet together, which applies not only in the fore/aft direction as you see here, but also laterally as well, where we prefer a narrow stance, which also works towards improved balance on the outside ski.

Another reason for this "push outside ski forward" cue is to carry speed on a course and keep the ski carving... however, as we saw, as soon as we start pushing the ski forward and away from the body, the carving will lose turn shape and it becomes self-defeating.

Sometimes, this is used to avoid skiers jamming the outside ski late in the turn - but in this case, a simple workout on a good release (Flexing workout session) will fix that issue, without many side effects. Note that jamming the outside ski frequently can also be a result of a boot that's improperly aligned fore/aft and it is important to fix that first if that's the case - not jump to changing technique.

So do micro-telemark turns is what you are saying?

As a tele-racer that barely doesn't suck I take some pleasure in your post but also have a bit of perspective that may have value. We tele-folk fantasize about uphill ski weighting, and that uphill ski is a boot length back for disciplined telemarker or femur+tibula back for those that go low.

Here is the deal: The inside ski runs the show in tele and it sounds like it does in alpine. Your inside ski is your risk for hooking a tip, your stability/recovery edge when the outside hero edging fails and it is your quickness. When I have intellectual access to my skiing I am always thinking about my inside edge. Outside is along for the ride with all it's brawn but the brains are on the inside edge--citation to Sarah at Belleayre for that observation.

I think that pushing the outside ski forward is a useful concept and cue in the context of having pulled it back (actually, left it back and, at the same time moved pressure forward of ski) at the top of the turn. If one can really feel the push forward, then one has successfully started a high turn.

Hi Breck, that's a nice way to put it, I think JF Beaulieu said also something along the lines of "outside ski is the rider, the inside is the decider".

But nothing quite as extreme as tele - the stiff boot cuffs are in the way ;) although I may train it at that level of intensity sometimes...