Here's a more complete review of how important the inside ski is for performance skiing.

What we do with the inside foot is four things... each useful by itself, but in combination, they are fantastic:

Also, related complementary movements from the inside hip:

While there are hints here and there about its importance, there's not a lot of focus on coaching the proper use of the inside leg, foot, and ski... a lot of the good racers do what's needed, but mostly not because they have focused on it, but because of Darwinian-like selection and all sorts of other cues and outcome-based instruction like "keep shins parallel", "tips even", "weight the outside ski" etc. 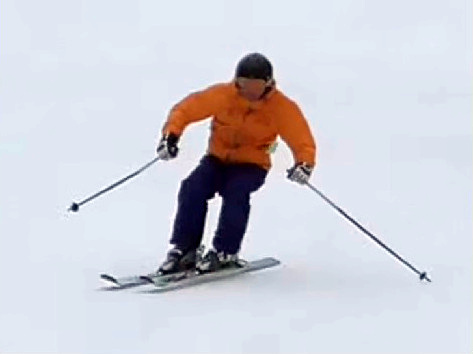 Using the inside foot

I think that not focusing sufficient instruction on the inside ski is a costly mistake! To start with, that's 50% of the skis/feet/legs we have to work with and the one with the better range of motion and mobility since it is mostly un-weighted. As your skiing improves, you realize that it is mostly about balancing on the outside ski while managing the inside leg/foot/ski (and other body parts not under load).

Unweight the inside ski

Today almost everybody agrees that the pressure should be mostly on the outside ski, thus the inside ski must be light. You can exaggerate and even lift it off the snow, that's especially good for training. If you instead put weight on the inside ski, the outside ski will not hold as well and the body cannot get inside the turn as easily. In more advanced sessions, we'll talk about Create the turn with flexing and Pull the inside boot up, both important for developing large edge angles.

In fact, if you look at photos of racers over the past few decades, you will notice an exaggerated lifting of the inside ski at the beginning of turns - present in all modern-day high-performance skiing. Can you spot it here in this modern still of Mikaela Shiffrin tearing up a WC GS course? 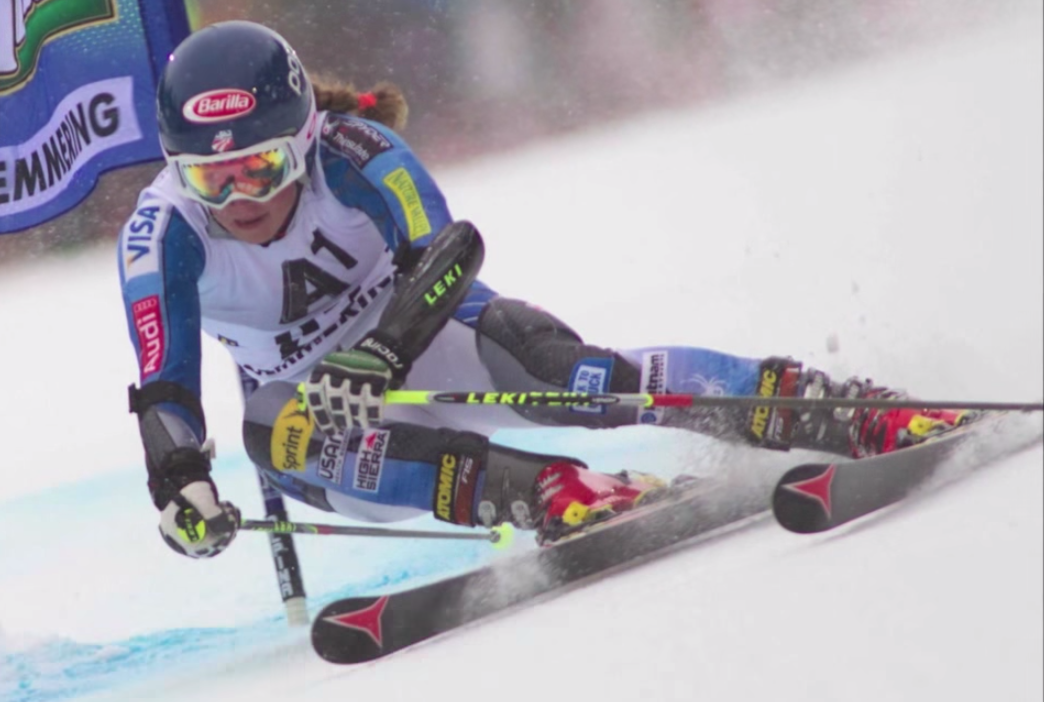 Foot tipping and tipping the inside boot is a related movement, because by tipping you are also lifting the inside edge off of the snow or lightening it.

Holding the inside boot back

As the angles build on steep pitches, the bio-mechanics at play and the boot geometry will tend to push the inside boot forward anyway, to keep the ankles at the same angle, towards the end of the turn, see tip lead. Thus, keeping the inside boot back and not letting it shuffle ahead too much is perhaps more important than lifting it:

One cue could be trying to keep the ski tips even, but truly you are just holding the foot back, so it doesn't shuffle too much in front of the outside ski. The main movement to keep the inside boot back and avoid a massive shuffle is Dorsiflexion or "closing the ankle", together with holding the foot back from the hamstrings/glutes, depending on flexion. When we strongly close the ankle, we do not allow the boot to move forward due to the geometry. Keep your feet underneath you if important for balance, control, and Fore-aft alignment.

As to the timing of this movement, since it enables tipping, it is the first thing to do, right as you transition: one of the reasons we do it is to bring the hips forward and you want that super-early. Basically, you can think of it as ending the turn with the old outside ski behind the old inside ski (which is also uphill at this point). Just try to keep them that way... 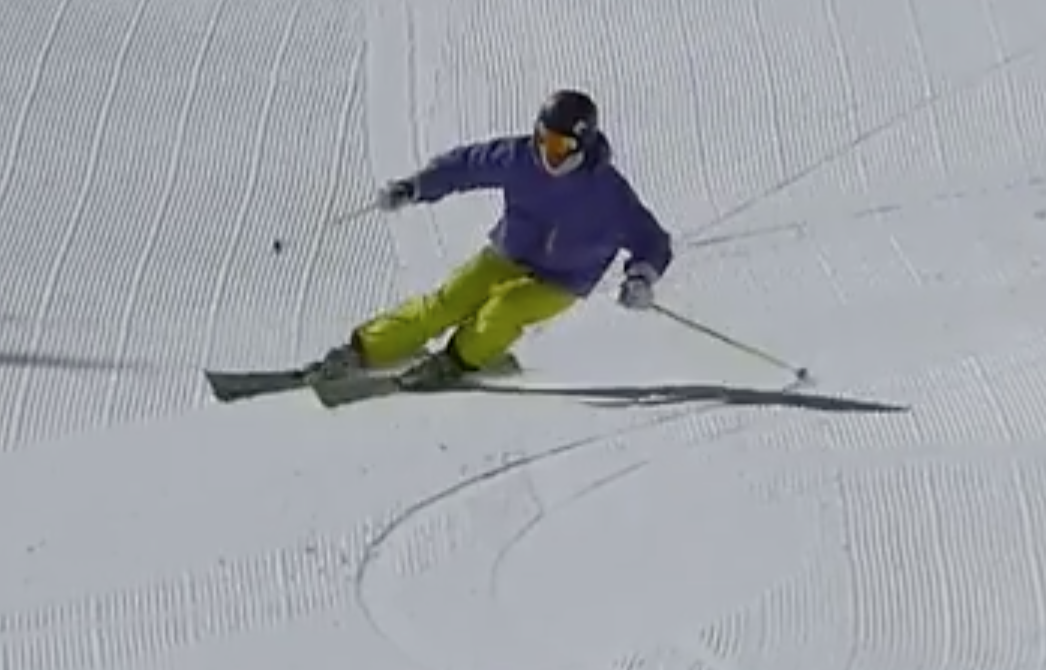 Going back to cues, once you understand the action/movement you have to take, we prefer external cues for engraining it, so you have keeping tips even at the beginning of the turn and touching the inside boot with the outside knee at the end of the turn. Those are very good cues.

Biomechanically, this is a very important movement. Its opposite is shuffling the inside ski/boot ahead, which will simply open the ankle, not allowing effective tipping of the foot, anymore. It is extremely easy for you to test this: just shuffle your left leg half a boot ahead and try to tip the foot and move the knee to the left. Now pull it back and try again - much easier, eh?

Tipping the inside foot

Some would tell you that keeping shins parallel is paramount and certainly, it is a recurring theme in good ski instruction, but going beyond that, tipping the inside ski also drives/enhances the tipping of the outside ski, both at low speeds and in high-performance skiing. Some call this effect "phantom tipping".

One thought would be that tipping the ankle/shin on purpose moves the inside knee down, rotate the femur, and then also drag the hips thus the outside ski with it into more tipping, at low speeds.

There is a very obvious connection between pulling the inside ski back and tipping it, which you can easily feel for yourself. If you let it slide ahead instead, you can't tip it effectively anymore (reduced range of tipping) and the only thing left to do to put the ski on edge is to dump the hips into the turn. If you focus on pulling it back, then tipping it is natural, and the two movements (pull back and tipping), combined, enhance greatly the turning of the outside ski.

Flexing (or shortening) the inside leg is really the mechanism to lighten the inside ski. But, going even further, we can keep flexing it and pulling it to the chest to get maximum angles, since that will pull the body more into the turn.

Shorten the inside leg

Shortening the inside leg, relaxing or even retracting it, is very important for creating big angles and extracting more performance from the ski, changing the turn shape for speed control (Speed, turn shape and control), etc.

See Create the turn with flexing and Pull the inside boot up.

It is important to keep driving the inside hip forward so that the body does not rotate through the turn, even as you pull the inside boot back! See Strong inside half.

Drills to learn inside ski management

The phantom is really the best drill to work on the inside ski management.

Braquage is good as well. Focus on keeping the uphill ski both close to and parallel to the downhill ski and the toe bindings matched or the ski tips even, as you slide down with all weight on the downhill ski. Do this a lot.

Progress to falling leaves and then 360s on a steep pitch, where you again focus on keeping the inside ski (continuously transitioning between the left and the right) close to the other one, parallel to it, and even tips.

This will give you a hint of the effort and movements required to manage the inside ski, for effective skiing.

As far as tipping it goes, the phantom javelin is the best: do mini-javelins where you only overlap the ski tips as opposed to crossing them. Keep the tip of the inside ski down (on snow or over the other one) and the tail up, keep the boots close and tip the inside ski.

See Tipping in balance for more details on these drills.

Member-only content avilable (166 words).
To see more on this topic, you need a membership. (Gold)

So, if you are to focus on one of your legs and feet, it should be inside.

Keeping the skis close enables this management of the inside ski/foot. It is much harder to pull it back and tip it if the skis are wide apart.

If you enjoyed the detailed technical content in this article, consider joining, for much more in-depth technical details, drills and on-snow sessions and more.

There is not a lot of literature out there... See my Ted and the Inside Ski post for visuals.

The focus on the inside ski was introduced to me by way of the Essentials of Skiing book (which is still the best way to spend 25$ on skiing).

Use of the Inside Ski in Modern Race Turns, By Greg Gurshman

On snow sessions to work on this: