Talking about separation of the upper and lower body, specifically the "rotational separation", a big difference between several approaches to skiing and respective schools of thought appears to be due to an upper vs lower body "anchoring" philosophy - we ski technique geeks can't do without a little philosophy, so let's dive into this one - it can offer an interesting perspective into how various people ski.

On one hand, the common advice is too often to "turn the feet under the stable upper body". The assumption behind that is as if the upper body is anchored in "the ether" and refuses to rotate, even as we rotate the lower body with boots, skis, and everything we have on there.

The opposite way of thinking is that we tip the skis on edge and then their design (sidecut) interacts with the snow and this is what turns the skis. In this frame of reference, the upper body would very much like to turn and follow the skis (remember, a common problem with skiers) and we have to actively resist that tendency and counteract it by pushing the inside hip forward.

So, in the image above, we see number 3 not as a movement, but as a result of tipping the skis on edge and balancing on them (1 and 2). Thus, to maintain separation, we need to counteract that: number 4. The result is cleaner turns, without much pivoting: here's the same skier:

It may not look that different until you look very closely, but the second set of turns is much cleaner and stronger and the difference can be seen in the transition: 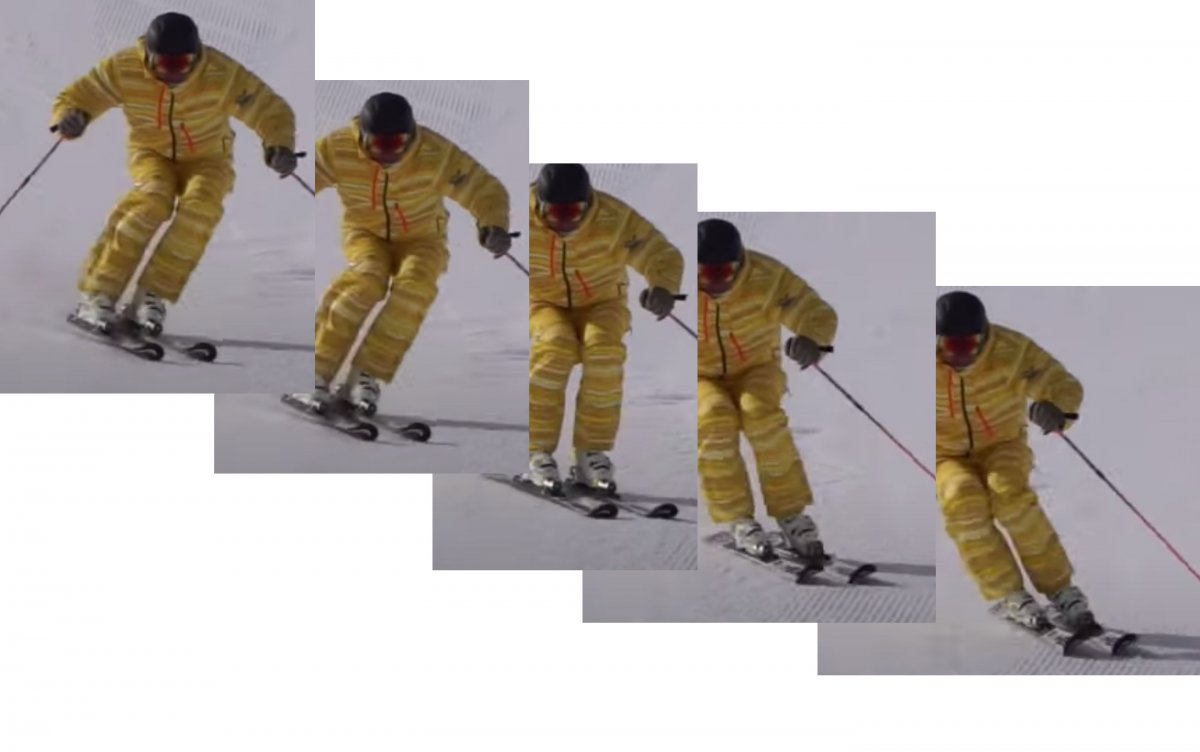 Look how much the skis glide across the snow from one turn to the next without any redirection - this is carving technique, for clean turns and results from a focus on not turning the feet under the body, but keeping the body coiled and the skis tracking cleanly towards the next apex.

To understand where the "stable body" notion comes from, consider that when forcefully twisting and pivoting the skis, it's much too easy to leverage against the upper body's inertia. In this case, it's easy to feel as if the upper body is "anchored" and we rotate the lower body underneath, say when we ski the zipper line in a field of moguls.

When carving though, it is clear that the skis turn because of the interaction with the snow, and then the upper body must be stopped from following them by counteracting. The upper body would very much like to rotate with the lower body, simply because the two are connected and it takes considerable skill and practice to "separate" them.

So here's how these two schools of thought result in vastly different outcomes and kinds of skiing.

Basically, if you think that the upper body is somehow anchored in the ether and does not want to turn, then steering and pivoting the skis underneath this stable body appear as central concepts, simply because you then "turn your legs against a stable upper body". **The upper body is the anchor and you turn the skis yourself **.

If, on the other hand, you think that the ski-snow interaction turns the lower body, then you're most likely to think of the upper body moving counter to this influence, to appear stable and not lean into the turn or turn with the… turn, if you want.

The difference for me is one of the propensities for carving. The ski-snow interaction is strongest when carving and weakest when pivoting the skis over the surface of the snow. If this interaction is generally weak, given a propensity for skidding and pivoting turns, then an "upper body is anchored" philosophy is more common.

If on the other hand, carving is the preferred turning method, then quite obviously, the ski-snow interaction is very strong and it is obvious that this is what turns the lower body (i.e. the bent ski gliding on tracks), not some skier action. The skier's lower body efforts merely allow this turning to occur unimpeded and follow the skis as they turn. In this case, the upper body is generally seen as wanting to follow (since it's not anchored) and needing special movements to prevent it from following the lower body in both leaning into the turn and rotating with the turning skis.

Both approaches are valid, in their own circumstances. Certainly, in the air or unweighted, the upper body is much heavier than the lower body and thus any lower body redirection or rotation would be executed against the upper body's inertia. While if you are carving a lot, you know that the bent ski turns, and thus that provides the anchor that the upper body must be reacting to!

The difference so far maybe was not so impressive, it is fairly subtle - where this difference will show is in how much performance you can extract from the skis. This type of skiing is not possible if you think "turn the skis" but only if you focus on ski engagement, ski performance, and "then the body":

Making clean carved short or slalom turns is the pinnacle of technical skiing and our focus here, on EffectiveSkiing. If you want to read further detailed analysis of this, very relevant to expert skiing and racing, continue with this higher-level talk: Flexing and upper body anchoring.

Drills to work on this: