The transition is the part between turns, when you are transferring from one set of edges to the other set of edges. The components of a good transition are releasing the edges from the previous turn, the transfer - where balance (weight) is transferred between skis and you are going through "skis flat" and on to the new set of edges - the "edge change", followed by the engagement of the new edge.

One determining factor for the transition is how you released the previous turn. In a good transition, you have extracted enough performance from the previous turn and you are floating, with the skis carrying minimal weight but still in contact with the snow - although in high energy turns, the skier is sometimes bounced off the snow. 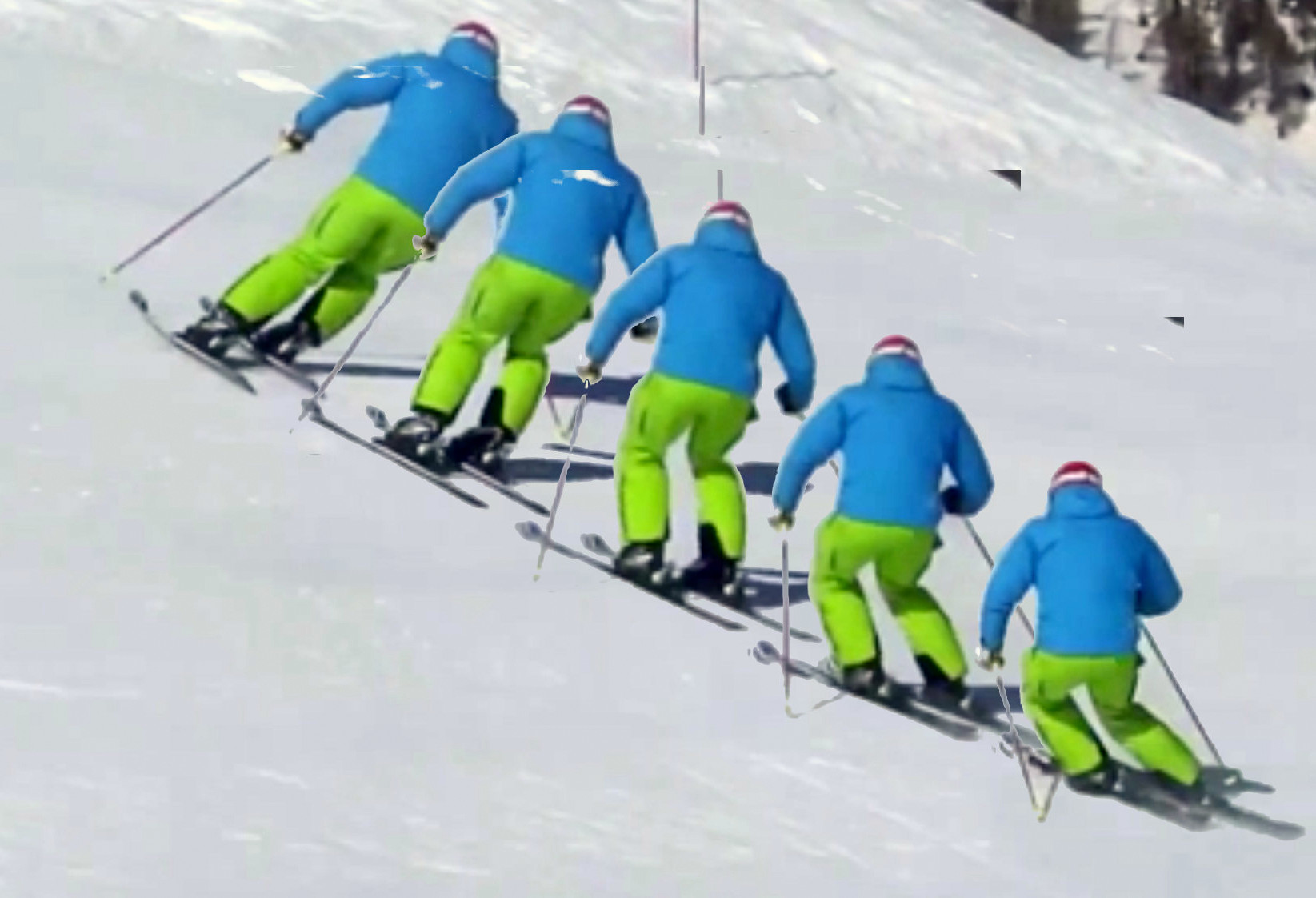 Skimming the surface of the snow. Skier: Stefano B.


You're not always releasing before the transition - in fact there are a few Release transfer engage sequences. If you want to read more about the categories and types of transitions - these are categorized under the topic of Release.

Here we'll look at some important elements of the transfer:

There are two main types of transitions, the low transition and the extended transition :

The extension is most frequently seen in recreational skiing while the other is typical for expert and performance skiing and racing.

Note that sometimes a combination is used, where the skier does flex the leg during the transition, but after having pushed up, to be able to release the ski from the previous turn. The nuances are discussed at the release.

The default transition is one with a clean edge change - in a clean transition, typical of carving turns, we avoid pivoting the skis, which have a tendency to twist and change direction when flat on snow, especially when coiling properly from the previous turn, as the stored coiling tension throughout the body tends to leverage the upper body's inertia and twist the much lighter lower body, boots and skis.

A smooth and continuous edge change is great, like in these windshield wipers turns:

Although this is our "go-to" transition whether the turns are carved or steered, if a clean edge change is not in the cards, we talk about redirection transition and it can be a stivot, a step or even a stem, especially when we're going over terrain that's too steep to ski "cleanly".

When a clean edge change is not possible, due to various reasons, we are dealing with a redirection. There are a few ways to redirect the skis, from full-on stivots, to pivoting and steering a light ski, to the GS step++ etc.

Note that while many tend to bundle all manner of redirection mechanisms into a single term like "pivoting" or "rotary" or even "steering", there are many ways to cause the ski to redirect, see Oversteering. Some of these are better than others. In general, it is good to avoid unnecessary angular momentum, so a strong twisting of the feet is best avoided in a clean transition.

In short and skidded or drifted turns, a controlled edge change is also important, avoiding a large rotary muscular input to pivot the skis when they are flat on snow.

In larger angle short turns, the steering angle comes mostly from a fore/aft movement and the extension of the legs (as a rotation of the skis is not possible when in edge).

The internal femur rotation happens from tipping and edging. The steering angle [...] happens from a forward/backward movement of the leg.Reilly McGlashan, Legacy part 1 1

See Flex to transfer weight as a good session to start working on the weight transfer.

The other important thing to do in transition is to get forward again, to recenter and pull the skis back under the hips, so you start the next turn carving, with pressure on the tips - see the first few frames below, where you can see how the boots are pulled back and kept under the hips through transition and even as the outside leg extends:

If you feel the back of your boot cuffs in transition, you need to pull back harder on the boots and not let them get too much ahead of you - try to feel the shins pressing in the tongues of the boots, that's a sure sign that the boots are as far back under the hips as they can be. Later, as you extend to the side, that tension will keep them right under the hips, so you can apply pressure wherever you need on the ski (the tips to start the carve) and that's expert-skiing++.

If the previous turn was not that great, or the release mistimed, then you have some work to do to recenter and get the hips ahead of the boots, for the new turn.

Floating is not as much about unweighting (although it is in a big part), but about a time between turns where you feel like "time stands still" and you're full of options about what to do next and when to do it!

The float is not as much a technique as a place between turns where time stands still.Anyone Can Be An Expert Skier 2, p87, Harald Harb, 2001

The other thing you will notice on the photo above is coiling in the first few frames, (separation, counter) where the shoulders point more down the hill while the skis transition to the side. This is another sign of expert-skiing and it is more pronounced in shorter turns.

In fact, from top to bottom, while the skis turned more than 90 degrees, the shoulders barely turned maybe 20-30 degrees.

Advanced elements of the transition

Member-only content avilable (286 words).
To see more on this topic, you need a membership. (Gold)

At the expert level: