This is the typical movement framework used in most ski instruction organizations 1 3. There are several planes of motion (sometimes planes of balance), that are used as a framework, to describe movements:

Note that while some make movements a focus (NZSIA) most do not (CSIA, PSIA) and instead use the movements only to assess skiers9 and focus instead on developing "skills"8.

The planes of movement

These are the planes of movement: 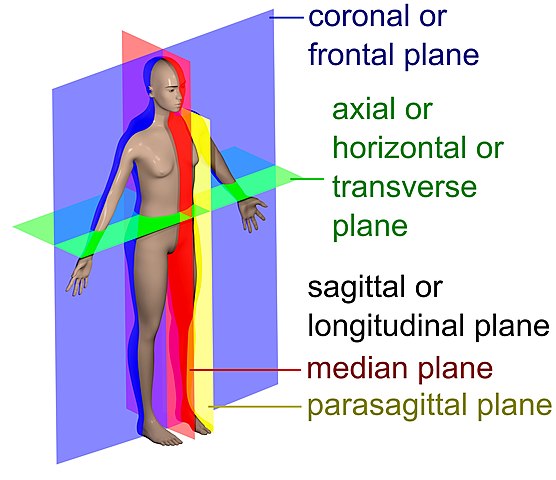 The movements are often analyzed in relation to the plane they take place in - even if some movements may span several planes, there is one predominant plane for the movement.

It is very important to note that there is a lot of confusion around the planes of movement in skiing, as these are defined in relation to the ski surface and not in relation to the snow. For instance, even at big angles, leaning in is a missing lateral movement even though the skier is at a big angles from the snow. Likewise, keeping an upright torso at bigger edge angles represents alot of lateral movement (angulation) even though the torso may be vertical to the snow.
Similarly and perhaps more important, vertical movement is often misunderstood to mean hopping up and down like a meerkat, but in essence it really means having a long/short leg, when the ski is at various edge angles.

Movements in the fore/aft plane are used for balancing and pressure management, see fore-aft, forward, pressure and Recentering.

These movements are not specified in detail and using all joints is recommended, to stay in balance and to use the skis.

In racing, "getting forward" is very much a focus (getting the Center Of Mass ahead of the Base Of Support3), since the higher speeds and energies make it a challenge to stay in balance and control on the skis at all times (even a little aft pressure has major negative consequences). Closing the ankle specifically is a very important aspect of staying forward.

Movements in the lateral plane are angulation and inclination and their purpose is edging the skis and balancing on the outside ski.

Edging the skis results from a mix of inclination and angulation (when angulation is used, we get tipping), although some interpretations mention specific ankle movements.

Care must be taken when interpreting these, as a focus on large upper body movements for edging, potentially leads to hip dumping. Good instructors are careful to specify that "we ski from the feet up".

Although referencing the same technical framework, race coaches generally are focused on the biomechanics around tipping and are careful to focus on the ankle's involvement, to both engage and release the skis4 5. Also, a general focus on edging as opposed to pivoting is transparent.

Vertical movement is flexing and extending, but usually defined as moving the COM (center of mass) further (extending) or closer (flexing) to the BOS (base of support).

At the higher performance levels, there is a shifting attention to creating the turn by flexing the inside leg, where flexing and extending of each leg is considered - also heavily used in racing ("long leg - short leg").

Racers tend to focus on getting the hips ahead of the boots (COM ahead of the BOS) rather than using a lot of vertical movement.

Movements in the rotational plane are pivoting, steering and countering. Counterrotation is a pivoting mechanism.

Often, the counter is described as a passive movement, i.e. "ski into counter" or "due to tip lead". In race coaching however, coiling is preferred to a passive countering.

Coiling implies a strong effort, but the lines between coiling and steering are often blurred, with some proposing that we "always steer the skis under a stable upper body" - see Steering and coiling.

Focus on pivoting and steering vs carving

Customarily, ski instruction is focused on "pivoting" and "steering" as opposed to "edging" and "carving", which tends to be the focus of racers5 looking for ski performance.

This is visible for instance in the description of the phases of the turn where some insist that we start the new turn with pivoting the femur8 while some call that phase of the turn "edging"3, specifically.

The CSIA/PSIA as well as CSCF/USSA for instance eschew movements or maneuvers and focus on teaching by developing skills. The use of the movement framework is for evaluation rather than as a focus for instruction8 9.

The duration, intensity, rate and timing of the movements is part of tactics. So is line selection and use of terrain.

This refers to the use of the body's components (skeleton, joints and muscles) through micro-movements like dorsiflexion or inversion and the application and use of mechanical principles like impulse and force3.

Issues with the planes of movement

The issue with the planes of movement is the changing relationships. For instance as the counteracting in the rotational "plane" brings the skier over the outside ski, bending forward at the hips is no longer in the frontal plane, although it is the same movement.

This is why, throughout this website, we prefer the Essentials framework, see Skiing - a philosophy of movement, as being more precise biomechanically.