If you pop tall out of the previous turn, even if you are able to create a top of the new turn like below, you are inclining into the new turn and then have to wait to build angulation gradually, as your hips move lower and catch up with your shoulders. It is slower to initiate because it's based on your body "falling" into the turn. 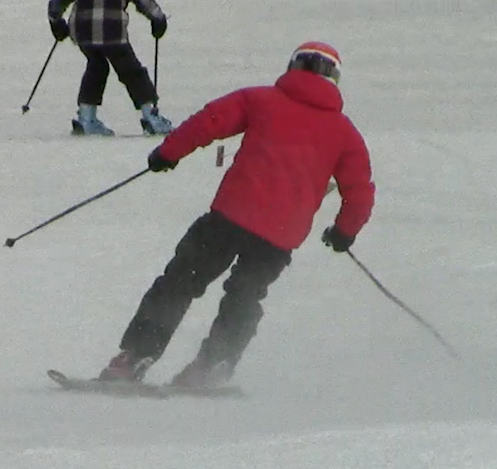 That's slow and also interferes often with engagement of the edges at the top of the turn: here's later in the same turn: some angulation has been developed by the fall line but not too much: 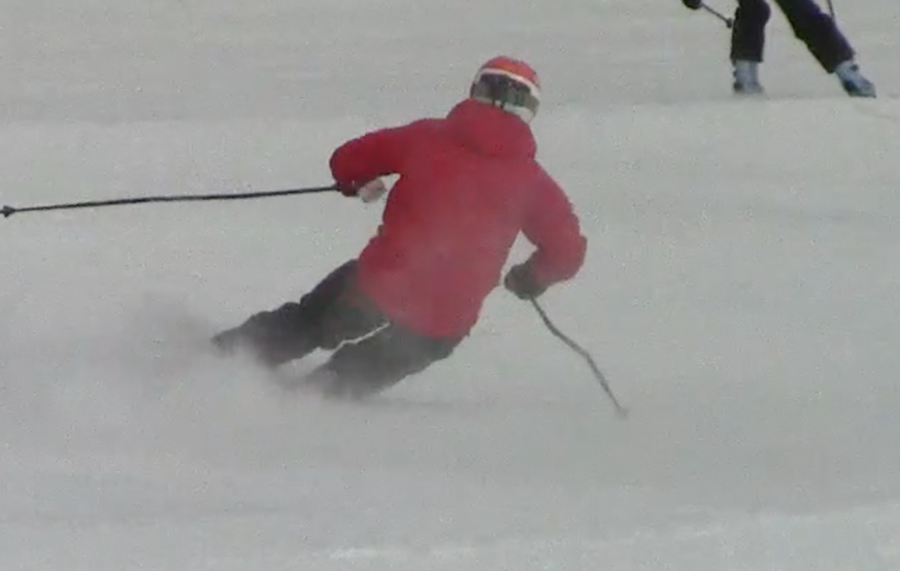 This is an issue in direct relation to how short the turns are - the shorter the turns (SL) the less time you have to wait for the body to "drop"! Also, on ice, the hips will interfere with finding a grip early.

On the other hand, if you came out of a retraction release, your hips are lower already and then you extend the outside leg, you essentially create angles and angulation from the lower body.

We could also use this to think of counterbalancing as a holistic movement to counter-balance rather than solely an upper body movement, although it is obvious that even in the image below, the upper body works a lot to maintain the "stable" appearance.

Also, there are two steps to angulation: one is creating it and one is using it. Most people rush and do both at the same time, while high level skiers can have the patience and time to build it and THEN use it or make it effective by muscle contraction, as needed.

Contrast the previous turn with this one, where the hips were low already due to the retraction release and both angles and angulation established much sooner:

This thought is encountered fairly often and many skiers focus on creating first inclination into the turn (i.e. like banking) and then angulate at the fall line. Few things can be more wrong.

First off, there is no inclination muscle! The only way to create inclination is to let the body incline into the turn. This in turn will delay engaging the counterbalancing muscles until later in the turn. If you have enough time in a large turn, sure, go for it, but in a quick technical turn, you will not have the time.

I think a reason for this is simply turning observation into instruction: many great skiers look like they are inclining between turns, but it is simply a temporary alignment, as the legs go from vertical to max angles and the torso counterbalances. For instance, number 3 from the top below, may look like the skier inclinated on purpose, but it's nothing of the sort. 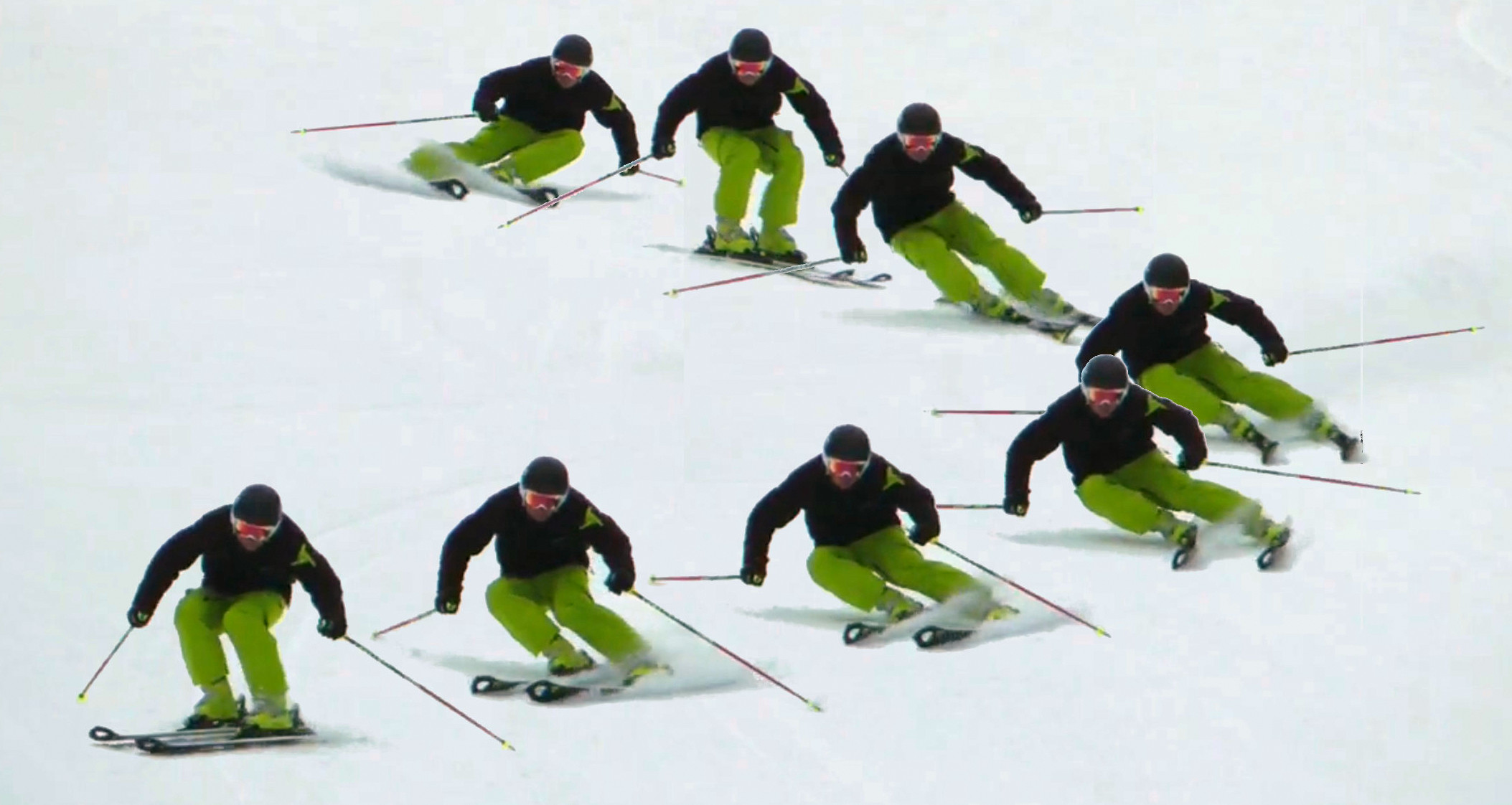 As the legs are extending to the side and the torso counterbalances, they temporarily align and look like they'd be inclinated on purpose. The reason is that it's very difficult for a skier to maintain a vertical torso in performance skiing, see Marcel below - notice the torso is not perfectly vertical, but a little inclinated to the inside of the turn: 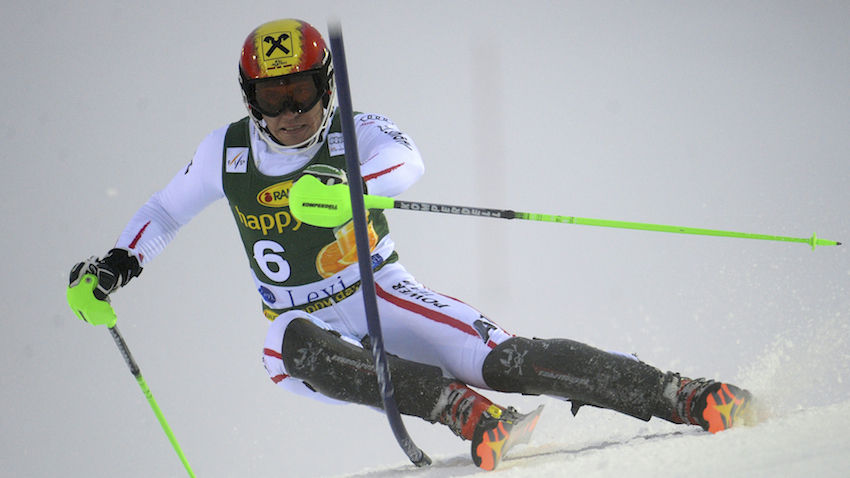 The reason is strength and power: it takes a lot of athleticism to ski at a performance level with a vertical torso, so skiers let it incline more or less, as needed for the turn. Thus, there will be a moment between skis flat and apex, where the legs and torso align and appear inclinated, but that's not something the skier intended, the skier was simply moving and counterbalancing.

The notion of toppling refers to moving the body into the new turn, so in that sense it is similar to inclinatio of COM, however some confuse that with inclination in the sense of banking into the turn.

Banking or inclining the body into the turn is one way to introduce skiers to the concept. However, in performance and effective skiing, the focus is not in "falling into the turn" but in effectively releasing the previous turn and allowing the body to cross into the new turn, with a focus on counterbalancing as much as needed.

As the saying goes: "there is no inclination muscle"!

They don't actually come up fully off the ground because the bike is quite heavy, but the weight is reduced and good racers, at speed, flicking their bikes are aware of this effect.

This same mechanism applies to skiing: in a turn started with inclination from an extended stance, the act of banking or inclining reduces weight on the edges that are about to engage. This is another reason why we consider it better to strive to start most turns from a lower stance and develop angulation early.

Here is another point of view: Incline to win.